Directed Energy Deposition (DED) is a 3D printing technology specifically used to create 3D models from metals and alloys. The technique can be applied for making 3D parts or objects from polymers, glass or ceramics but is not popular for that. This technique is quite commonly used for repair of existing 3D models built using metal or alloy. Many times the technique is used for adding extensions to existing metallic models.

The typical apparatus for Directed Energy Deposition 3D Printing consist of a head for material wire supply which can move along multiple axis and an electron beam projector or high power laser beam projector which melts the fed wire through directing the high power radiation. Due to use of Laser beam, Directed Energy Deposition is also known by the names – Laser engineered net shaping, 3D laser cladding and directed light fabrication. The use of metal wire or powder as feeding supply, the technology is sometimes also referred by the term – direct metal deposition. The process of DED is similar to that of the material extrusion but in DED printing method, the nozzle supplying the material particles or wire is mounted on a multi axis arm. So in contrast to material extrusion, the feed supply is not restricted to specific axis. The model is built on a surface (which is not necessarily a flat platform) from bottom to top. The nozzle for feeding the metal wire or powder can project the feed supply onto the target surface from any angle as the multi axis  arm allows movement in four or five axis. The laser beam is directed towards the blown down metal powder immediately after its deposition on the target surface. Therefore, the deposition of metal particles and their melting to fuse together happens coherently. The shape of the model is controlled by controlling the feed rate and the angle from which the metal wire or particles are deposited on the surface. The deposition of material, its melting and solidification over preceding layer or target surface is done layer by layer basis. 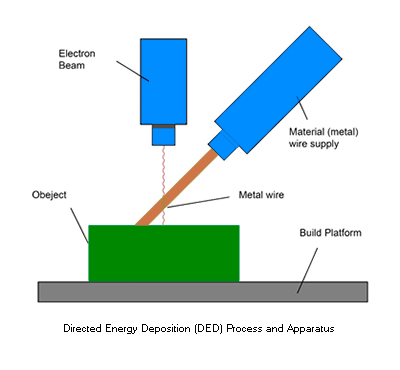 The main advantage of DED for fabrication and repair of 3D models is its accuracy and high resolution micro structure. The grain structure of the depositing metal wire or powder can be controlled to great extent which allows fabricating fine pieces of 3D parts. However, the process lacks speed and may even require post processing sometimes. The limited options of materials for use in directed energy deposition method is it’s another limitation. The process is also not seen to have scope for further evolution as is the case with other fusion based manufacturing processes. Due to limited scope of any advancement, DED is not deemed to be a 3D printing technology for mainstream industrial productions.

The technology is mainly used for making models and parts of Titanium, Tantalum and Cobalt Chrome. The process is not preferred for glass, ceramics or plastics models. This is a reason that use of Directed Energy Deposition method is limited to the aerospace and automotive sectors.

In the next article, another 3D printing process – Material Jetting will be discussed.