By 2020, approx. 200 million VR headsets are expected to be bought by technology freaks all over the globe. No doubt, the immersive technology applications are going to take a higher platform all over the world. However, what demarcates the technology with its users is the VR sickness. Whether it is used for professional purposes or entertainment purposes, virtual reality is known for giving motion sickness that can make the user uncomfortable and nauseated whenever they wear the headsets. Like the sea sickness, VR sickness occurs when the cues of visual motion in front of you do not sync with physical motion cues that are constantly sent to your brain by inner ear’s vestibular system. These are special kind of stimulations that impart a sense of motion, spatial orientation, and equilibrium to the users.

But the good news is that a team of researcher at the Columbia Fu Foundation School of Engineering and Applied Sciences is working in New York City for the same. The group was successful in developing a way out of this problem which means it is now possible to fight VR sickness. The new technique can easily be applied to all kind of VR headsets including the HTC Vive, Google Cardboard, Sony PlayStation VR, and Oculus Rift. 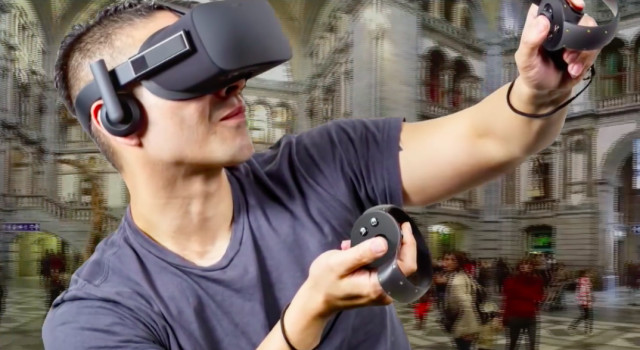 The two engineers working on it, Columbia Professor Ajoy Fernandes and Steven K. Feiner took an approach that is focused on the users’ Field of Vision (FOV) and modified it in a manner that is imperceptible to most study participants. This brings out a subtle change that varies the users’ FOV response to any visually perceived motion that takes place on VR display. As Fernandes goes on explaining more about it, “I was aware of the work on the change blindness – a concept in perceptual psychology that explains why people sometimes do not notice what would seem to be an obvious change in a scene. So I wondered if this could be applied to VR: Could we change a participant’s FOV without them noticing?”

For this purpose, both men created two groups of 15 individuals and each group had to spend a day immersed in VR without dynamic FOV restrictors and some other day along with the FOV restrictors. Whenever the participants wore the FOV restrictors, they were more comfortable and continued to stay in the virtual environment longer than when they weren’t wearing the FOV restrictors. The participants also added that they would pick the restrictors any day for future VR experiences. The two men have filed for a provision patent via Columbia Technology Venture and also plan to continue their study on FOV restrictors. This will now include the influence of these restrictors over the users’ heartbeat and optical flow whenever they acclimatized with VR experience. As Feiner likes to add, “VR has the potential to profoundly change how we interact with people, machines, and information. It is critical that the experience is both comfortable and compelling, and we think we’ve found a way.”