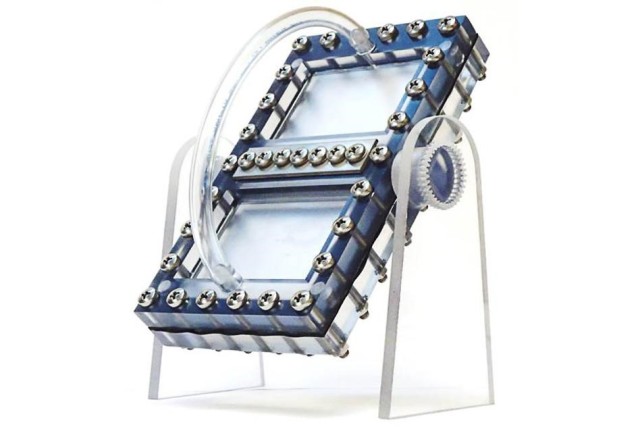 Battery technology gets counted among those technologies that always have room for improvement. This is why researchers at MIT decided to take a slightly different approach to this field and picked up a design from 1970s. Liquid flow batteries have been in play for quite sometime now. The positive and negative electrodes are liquid and separated from each other only by a thin membrane. The previous versions of this battery, however,were pretty different and very inefficient.

The liquid chemical slurry in these batteries have a very low density which is completely contrary to the weight of this battery. The systems of these batteries were also very complex in form of a twisted series of plumbing, pumping, and housing systems that again contained some liquid. The problem was recently solved using the Lithium-ion batteries. A team of researchers at MIT picked up an advanced version of Li-ion flow battery and discovered a new way for controlling flows with the help of gravity-fed system. It is very much similar to the hour-glass system.

Yet-Ming Chiang, the Kyocera Professor of Ceramics who worked hard on this project, states that it is a very early stage prototype and too distant from production phase. Nevertheless, this one displays the new ideas that can finally lead to some large scale technological innovation. The new design of these batteries eliminates the need of plumbing and pumping with the help of this gravity-fed system. The liquid slurry with chemicals can now travel between the chambers leading to better power density as well as energy density.

The rate of energy production can easily be adjusted by changing the battery’s angle or the flow speed. The efficiency of this system is improved with the help of hybrid liquid-and-solid chemical design. Chiang notes that the trickiest part in this experiment was taking control of liquid slurry characteristics for controlling the flow rates.It is a huge task to control the flow of liquids once they start flowing. The system could reach its maximum efficiency because the flow rate was modified by changing the angle of this device.

The new model takes complete inspiration from its pre-existing predecessor and the chemical compositions are too almost the same. But there is still a room for further improvement. Its applications can be very wide as per Chiang. It could be highly useful in creation of intermittent power sources like solar or tidal or wind power mills.