Continue to Site
Japanese Drone Maker, PRODRONE, recently introduced its new kind of drones, the PD6B-AW-ARM, along with a completely new feature – robotic arms. With the help of these arms, the drone can pick anything, snatch it, or even drop anything anywhere. For some people, it might be a cooler thing while some others may think of it to be a  creepy thing. The team working on it started the projecting by picking up one of the pre-existing airframes – the PD6B-AW. 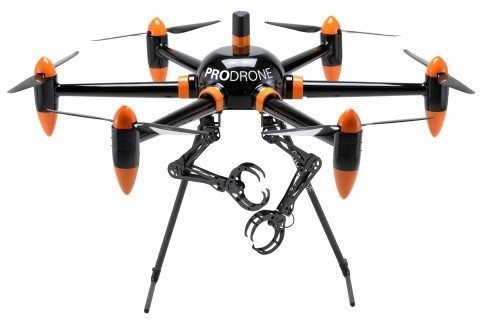 The one they picked up is a large sized, six-rotor model that weighs somewhat 41lbs and has the ability to bear weight worth 44 lbs. As compared to other regular drones, this is a big deal. The two opposing motors in this drone have a distance of 4.75 feet between them while the diameter is close to 27 inches while total height of this one is 31.5 inches.
As far as the robotic arms are concerned, those were developed internally so that they could sync with the PD6B-AW airframe. Its five-axis arms are capable of carrying the highest payload of around 22lbs. An algorithm has been programmed in it to maintain its center of gravity as its different arms move to pick or drop things. It can remain in the air for approx. 30 minutes which sufficient considering its dimensions and abilities.
Most commercial and industrial drones were more focused on some specific tasks like spraying pesticides or surveying or filming or photography, things that need to be done from a distance. However, there has been an increase in demand for drones that are capable of taking up hands-on tasks like delivering cargo or picking up stuff. Nevertheless, the applications of current innovation go way above just delivery services. These can also be sent to places with dangerous environments that need to manipulate devices and retrieve harmful materials from other places.
Filed Under: News