The new technique from the University of Central Florida’s NanoScience Technology Centre could ultimately revolutionize technology as varied as electric vehicles and mobile phones. “If they were to substitute the batteries with such supercapacitors, you could charge your mobile phone in just a couple of seconds and you would not even need to charge it again for almost a week,” says Nitin Choudhary, a postdoctoral associate who conducted much of the study.

Anyone with a smartphone is aware of the problem. After 18 months or so, it comprises a charge for less and less time as the battery instigates to degrade. Researchers have been analysing the utilization of nanomaterials to enhance supercapacitors that could improve or even substitute batteries in electrical devices. It is a problematic issue as a supercapacitor that possess as much energy as lithium – ion battery would have to be much bigger. 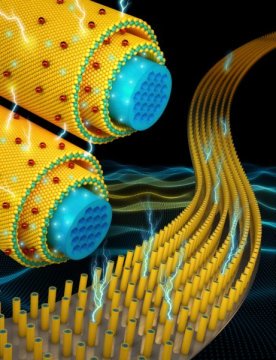 “There have been troubles in the way people incorporate such two – dimensional substances into the existing systems that has been a bottleneck in the field. We introduced a simple chemical synthesis approach so we can very nicely incorporate the current materials with the two – dimensional substances,” says principal investigator Yeonwoong ‘Eric’ Jing, an assistant lecturer with joint appointments to the Nanoscience Technology Centre and the Engineering and Materials Science Department.

“For tiny electronic devices, our substances are surpassing the traditional ones worldwide in terms of energy density, cyclic stability and power density,” says Choudhary. Cyclic stability outlines how many times it can be drained, charges and recharged before instigating to degrade. For instance, a lithium – ion battery can be recharged fewer than 1,500 times without significant failure. Current formulations of supercapacitor with 2-D substances can be recharges a few thousand times.

Supercapacitors that utilize the novel substances could be utilized in phones and other electrical gadgets and electric vehicles that could benefit from sudden bursts of speed and power. And as they are flexible, it could imply a significant enhancement wearable technology as well. “It is not ready for commercialization,” says Jung. “But it is a proof of concept illustration and our studies reveal there are very big impacts for multiple technologies.”