The scientists compared the properties of gallium nitride layers grown on SOI wafers to those grown on silicon substrates more commonly used for the procedure. In addition to high-performance silicon wafers, Okmetic also manufactures SOI wafers, in which a layer of silicon dioxide insulator is sandwiched between two layers of silicon. The aim of the SOI technology is to enhance the insulating and capacitive characteristics of the wafer.

“We used a basic manufacturing procedure for comparing the wafer characteristics. GaN growth on SOI wafers produced a higher crystalline quality layer than silicon wafers. In addition, the layer of insulating substance in the SOI wafer enhanced breakdown properties, allowing the use of clearly higher voltages in power electrical. Similarly, in high frequency applications, the crosstalk and losses can be diminished,” explains JoriLemettinen, a doctoral candidate from the Department of Nanoengineering and Electronics.

“GaN based components are becoming more popular in power electronics and radio applications. The performance of GaN based equipment can be enhanced by using a SOI wasfer as the substrate,” adds Academy Research Fellow Sami Suihkonen. 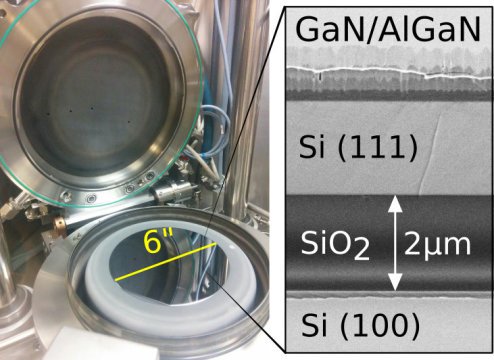 Growth of GaN on a silicon substrate is challenging. GaN layers and devices can be expanded on substrate substance using metalorganic vapour phase epitaxy. When using silicon as a substrate the grown compound semiconductor substances have distinct co-efficiencies of thermal expansion and lattice constants than a silicon wafer. Such differences in their characteristics limit the crystalline quality that can be accomplished and the maximum possible thickness of the produced layer. “The study revealed that the layered structure of an SOI wafer can act as a compliant substrate during gallium nitride layer growth and hence diminish defects and strain in the grown layers,” says Lemettinen.GaN based elements are popularly used in blue and white LEDs.