Continue to Site
Collin McGinn dreamt of a 3D display system that could work easily without projection, glasses, or reflection. He worked diligently for three years and finally came up with a Tru.D 3D, an amazing system that is capable of displaying volumetric holograms giving a 3D experience eliminating the dependence on glasses. McGinn is running a campaign currently with his team to collect finds for shooting a 90 second 3D movie using this new technology. 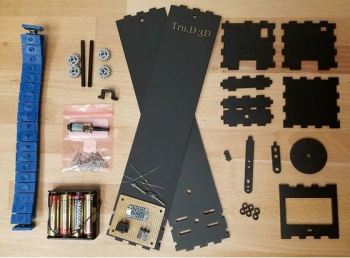 In year 2015, he was presented with a patent for “Volumetric Film Display Systems”. The most innovative thing about his project is that it has three dimensional projects moving on a belt in order to create a moving three dimensional image. As per the Kickstarter page, the term “volumetric” has been given for indicating a display that creates a film or video in real 3D physical space. He has created a small Tru.D device that can be held in hand for watching any three dimensional animation movie. The supporters can always choose from a water droplet, its reflection, a curved block, or a wiggling water bear as a reward for backing the project.
But what piques maximum interest in this project is mini projectors. The basic framework of these devices is cut out with laser from acrylic and most of the objects are printed in 3D. The motor is rotated by a controller that ultimately moves the thirty printed objects across the strobing lights which then creates a volumetric hologram.  On papers, the user can easily get print out of thirty parts of their own and form their personal hologram with the help of mini projector as base.
There are a number of people who question the trueness of these three dimensional holograms. As per the campaign video, the user watching a 2D video might not be able to do justice with the concept and a debate is unavoidable. The campaign will conclude on May 30th 2016 and if it successful the units will start shipping by January 2017.
Filed Under: News