There have been continuous innovations in the automotive industry whether it be the use of Near Field Communication in the upcoming car models or the futuristic self-driving cars. These innovations are driven by one motive and that is to make the drive more and more comfortable and smart or safer. This project is also a similar attempt to make the car drives safer by modifying the headlights to adaptive headlights.

The headlights of any car are generally fixed. Therefore, on turning the car during night drive, drivers face problem as the fixed headlights are not actually throwing off light on the path where the driver has been turning around. This makes the driving at night prone to accidents and the driver needs to turn around corners with extra caution. If the headlights are made to turn along with the direction car has turned, a driver can get the full view of the actual path he is driving through around the corners. This is possible by mounting the headlights to servo motors and automate the servos in coordination with the steering of the car. The steering movement can be traced out using a mechanical assembly attached with a potentiometer.

In this project, this innovation has been realized using the Arduino boards and connecting the servo motor circuit to the control circuit installed at steering through 434 RF Module. Instead of modifying a car’s body to the change Headlight’s assembly, the project has demonstrated the application using the LEDs mounted over RC servos. The control circuit is also not fabricated with full mechanical assembly on a steering but a  potentiometer is used in the project to illustrate raw functioning. Though, the project can be given a real life-size by implementing the car body modification with mounting rotatable headlights to the car and installing the control circuit with proper mechanical assembly on the steering.

Fig.1 : Block Diagram of Arduino based Adaptive Headlights for Cars

There are two circuits in the project – Steering Control Input Circuit and Headlight Servo circuit. In the steering control input circuit, a 10K ohm potentiometer is connected to A2 analog pin of the  Arduino Pro Mini. The other two terminals of the potentiometer are connected to VCC and ground. The Arduino is interfaced to RF transmitter by connecting the serial input pin (Pin 2) of the RF transmitter to pin 12 of the Arduino. An antenna can be used at the pin 4 of RF transmitter to improve transmission signal, however, it is optional and not really needed as the operational range of the project will be limited to the front dimensions of the car. On life-size implementation of the project, some mechanical assembly needs to be designed so that the potentiometer knob rotates with respect to the rotation of steering wheel. 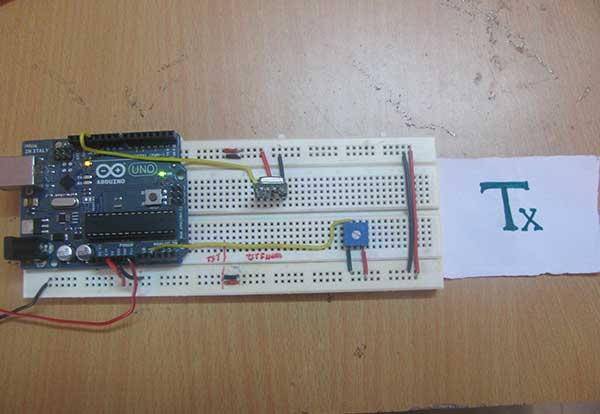 The potentiometer’s voltage output is read as analog data at the A2 pin of the transmitter side Arduino. The reading is converted to character form and transmitted over RF using the VirtualWire library functions in the program code.

The potentiometer reading is detected at the RF receiver and serially out to the pin 11 of the receiver side Arduino. The program code at the receiver side Arduino detects the potentiometer reading by reading the transmitted character buffer and converting the reading to an integer value. The value is compared with a default calibrated value and the direction of turning is judged accordingly. By detecting the direction car has turned, PWM signals are passed to the RC servos for rotating along the direction of turning. The LEDs remain ON by default and rotates along with the servo as they are mounted on them. Check out the transmitter side Arduino code to learn how analog reading from the potentiometer is detected in the code and converted to character form and serially transmitted over RF. Then, check out the receiver side Arduino code to learn how character buffer is read and interpreted to an integer value and based on the value read, the servos are operated. 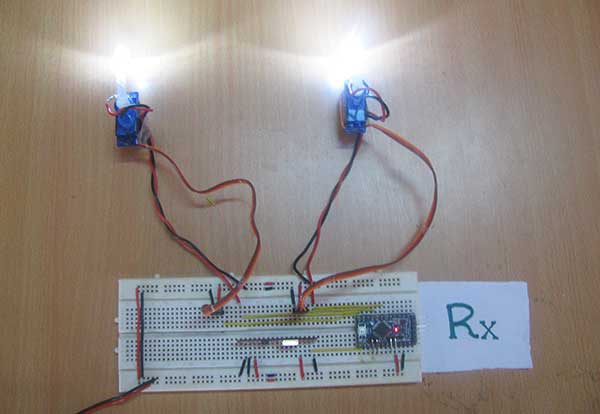 On the transmitter side Arduino, first, the program code imports the required standard libraries. The VirtualWire library is required to read the analog reading from pin A2. Global variables ledPin and Sensor1Pin are declared and mapped to Pin 13 where transmission progress indicator LED is connected and Pin A2 where output pin of the potentiometer is connected respectively. A variable Sensor1Data is declared to store potentiometer voltage reading. A character array Sensor1CharMsg is declared to stored decimal representation of the potentiometer reading.

The potentiometer reading is serially out as human-readable ASCII text using the Serial.print() and Serial.println() function.

The transmission progress indicator LED is switched on by passing a HIGH to pin 13. The character message containing the potentiometer reading is sent serially using the vw_send() function and vw_wait_tx() is used to block transmission until a new message is available for transmission. The LED at pin 13 is switched OFF by passing a LOW to indicate successful transmission of the message.

This ends the transmitter side Arduino code.

On the receiver side Arduino, the program code first imports the required standard libraries. The VirtualWire library is imported to receive potentiometer reading from RF. The pins where servos are connected are mapped to “servo” and “servo1” variables and other global variables – “angle” to represent the angle of rotation for servos and “PWM” for respective pulse width duration are declared. The “Sensor1Data” is declared to store integer value of reading and Sensor1CharMsg array is declared to hold character representation of reading through RF.

A setup() function is called where baud rate of the Arduino is set to 9600 bits per second. The servo and LED connected pins are set to digital output using the pinMode() functions. The pins where LEDs are connected are set to HIGH to keep the LEDs switched ON by default.

The RF transmitter and receiver module does not have Push To Talk pin. They go inactive when no data is present to transmit or receive respectively. Therefore  vw_set_ptt_inverted(true) is used to configure push to talk polarity and prompt the receiver to continue receiving data after fetching the first character. The baud rate for serial input is set to 2000 bits per second using vw_setup() function. The reception of the data is initiated using vw_rx_start().

The null character is detected in the buffer stream so that no garbage value gets stored. The characters received from the buffer are converted to the integer value and stored in “Sensor1Data” variable.

The variable value along with relevant strings enclosed is passed to the microcontroller’s buffer and Sensor1Data value is passed to servoPulse and servoPulse1 custom functions as a parameter to rotate servos.

This ends the receiver side Arduino code.