A team of researchers recently discovered a complete use for a basic glass tube piece – weighing things. A sensor fitted in glass tube will really speed up tests done for examining chemical toxic levels and would throw some light on the growth of plants and development of biomaterials. The research was led by an assistant bioengineering professor, William Grover, who is currently working at UC RIverside’s Bourns College of Engineering. His main accomplice was a doctoral student from Grover’s lab, Shirin Mesbah Oskui.

The paper published by the team speaks of the development of an inexpensive and basic sensor that will be able to scale volume, mass, the density of microgram scale biological sample present in the fluid. This research has several important applications in research related to toxicity as well as several other domains like biomaterials engineering, plant sciences, and developmental biology. While weight happens to be one of the most important measures of any object, weighing minutely small biological samples inside their own liquid environments is not possible. To rectify the situation, Mesbah Oskui developed a sensor with a very small piece of glass tubing bent into the shape of “U” and was then attached to a low-cost speaker. 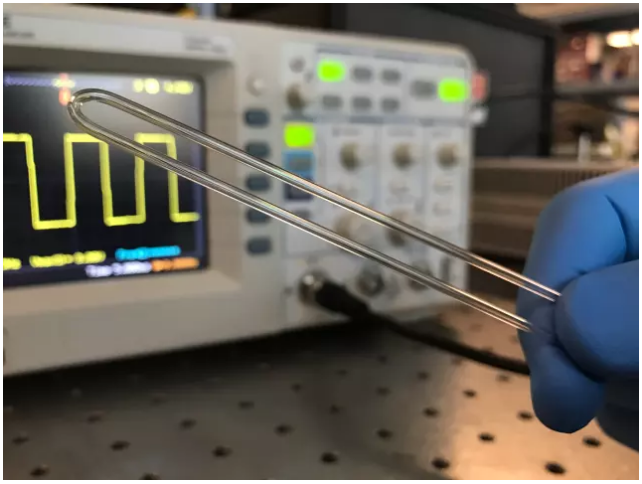 This speaker leads to vibration in glass at its resonance frequency that is an overall mass function for the tube. When a sample is placed in the tube, the resonance frequency changes, permitting the volume, density, and mass calculation. This research expands a technique that was originally developed over MIT for cells of weighing cells. When larger samples are tested with this technique, this research enhances the scope of its application. Mesbah Oskui adds, “ Zebrafish embryos are becoming an important toxicological model species, but until now scientists have not been able to include a very simple measure of health—the organism’s weight—in their panel of measurements. Our research changes that, which will further expand the use of this model in helping protect human health and the environment.”
Filed Under: News
Tagged With: Research