The United States Navy, recently, gave away a contract of USD $101.3 million to General Dynamic Electric Boat (GDEB), a well-known submarine manufacturer for navy. It’s a modification contract that bounds the company to develop Navy’s next-generation nuclear-powered ballistic missile submarines that will replace the presently deployed Ohio-class SSBN. The contract costs approx. $1.85 billion that was initially granted to GDEB three years back, this called for R & D of the Ohio replacement submarine. Referred to as the Columbia-class submarine (SSBNX), the construction of this one will begin from 2021. 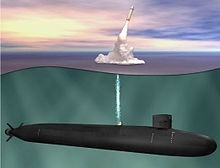 The contract modification aims towards procurement of 22 missiles tube that will work for the Columbia-class Common Missile Compartment or CMC. The CMC has been called in scene as U.S. aims to share it with UK’s Royal navy. The UK counterpart plans to replace its Vanguard-class SSBN with it. The Columbia-class SSBN will consist of 16 missile tubes each one of which is capable enough to carry the Trident II D5LE missile. The replacement submarine will also have a few similar dimensions with the present day Ohio-class submarines, their length will be some 560 feet while the diameter will measure 43 feet.

The GDEB believes that it’s Ohio-class SSBM  can be counted among the most effective warships that have ever been built. Also, the firm also claims that “these submarines are without question the most powerful ships ever put to sea,” providing the U.S. Navy with “an unparalleled combination of stealth, strategic capability and superior operating capability.” Claims like these regarding the Ohio-class submarine explains what Navy is expecting from the next generation of these vehicles. These will have an expected life cycle of 40 years and will be equipped with some of the most advanced technological devices.

The Navy also states that, “Owing to the unique demands of strategic relevance, [Columbia-class submarines] must be fitted with the most up-to-date capabilities and stealth to ensure they are survivable throughout their full 40-year life span.”