Nexar, an Israeli and U.S. start-up intends to craft ‘an air traffic regulating system’ for driving. As instigation to this, it has launched its dashcam app the previous year that recorded driving over 5 million miles across New York, Tel Aviv, and San Francisco. Till date, the app has an automated record of over 7 million cars, including 20 percent of registered vehicles in Manhattan and 45 percent in the Bay Area.

With the use of machine vision, smartphone camera and AI algortihms, Nexar realizes the registration plates of the automobiles around it, and tracks their velocity, trajectory, and location. If a vehicle speeds perform a criminal maneuver such as skipping a red light, such information is gathered into a profile in the online database of Nexar. When another user of Nexar detects the similar vehicle, it can signal a warning to offer a wide berth.

Lior Strahilevitz, a professor of law at the University of Chicago, projected a similar reputation gadget for drivers a decade ago. “I consider it as a creative and sensible way to assist enhancing the driving experience,” he says. “If you are driving a vehicle next to me and you are driving dangerously, then I will be able to know about it and stay prepared in advance.”

As per the estimates by Nexar, if even 1 percent of the drivers use this app regularly, then it would require just one month to schedule 99 percent of the city’s automobiles. “We consider this as an excellent service to the community to help them prepare for crazy drivers,” says Shir.

Also, Nexar has estimated that the organizations using its universal driving measurement could save around $125 a year on each policy. Drivers advantage, too, from the sensor and video footage stored in the cloud, which they can utilize to support their part of the story. 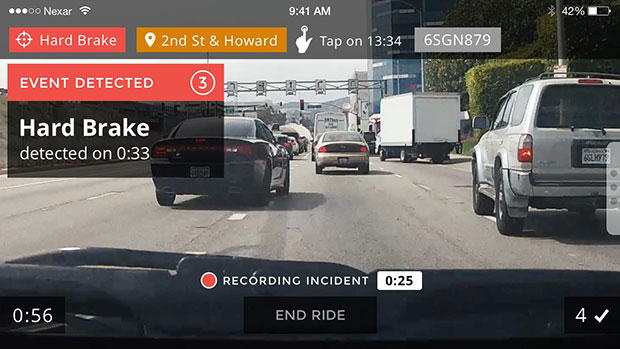 Shir believes that Nexar will also diminish traffic fatalities years before self-driving cars capture became the center of attraction. The app can accentuate treacherous collisions, or identify a car braking sharply and deliver signals to users several cars back or even around the corner. “This requires a real-time network,” says Shir. “We have optimized the technique that cars interact so that the latency is extremely low, around 100 to 150 milliseconds.”

The app from Nexar requires much more accurate geo-location than that provided by regular GPS systems, which are usually precise to within a range of 5 to 50 meters. The app captures data from numerous sensors in the smartphone. The accelerometer senses speed bumps and potholes, while the magnetometer identifies when the car will travel under power lines.

Shir believes that Nexar can assist drivers to realize the path of smart connected highways. Eventually, Nexar may succeed as the drivers are regularly rated, whether or not they are operating the app themselves. It the judgment would be by algorithms then no driver would want to rank among the records related to an accident-prone area in the next lane.