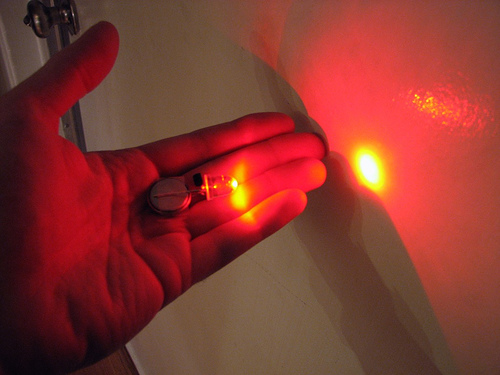 You can make your LED turn on when it gets dark especially during nightlight problem or other familiar situations like emergency lights, street lights and computer keyboard backlights etc. Windell Oskay has come up with an article showing how to build a very simple darkness-activated LED circuit by just using three cheap components, in less than five minutes.

This inexpensive light-controlled LED circuit can be a fun application to make LED throwies that turn themselves off in the daytime to save power and can last up to weeks after adding a light-level switch. Lithium coin cell, LED, phototransistor, a transistor, and a resistor is all you need to build this device. You can choose color of Led of your choice. The phototransistor is in a 3mm black package as the black package blocks visible light and is only sensitive to infrared light.

The simplest LED circuit of the LED throwie has an LED driven directly from a 3V lithium coin cell. From this, a phototransistor is added which senses the presence of light, and the output is used to control the transistor, which turns the LED on.

The circuit is tested by squeezing the coin cell between two terminals of cathode and anode. The positive side goes to the lead touching the resistor. The leads are bended to contact the lithium cell a little more reliably. This makes a pretty good nightlight attached to the top of a doorframe and when the room lights are off, it shines as a bright spot on the ceiling.

Other possibilities to improve this device is to make a larger circuit and for batteries, go for a lower internal resistance than the lithium coin cells. Make sure not to place an appropriate resistor in series with the battery before trying to operate this circuit or else too much current will flow through the LED.  This is one of the easiest and least expensive ways to control an LED with a photosensor.