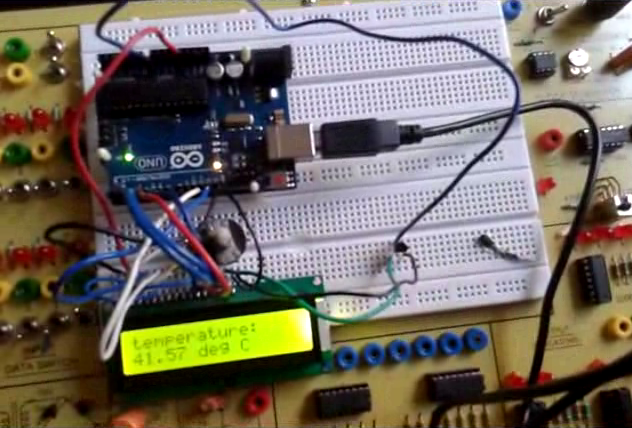 3. RW pin is connected to ground.

4. A 10K pot is connected to 3rd pin VEE of LCD to vary its brightness.

5. LED+ terminal and LED- terminal are connected to 5V and ground to turn on LED back light for LCD.

• The LM35 sensor give 0 to 1 V output as 10 mV/oC – means as temperature varies by 1 oC the output voltage from sensor increases by 10 mV and vice versa.

• Because the output of sensor is connected to analog input of arduino it will convert this into digital value from 0 to 1023.

• Because LM35 sensor output is limited to 0 – 1 V only, internal reference voltage of 1.1 V is selected for internal ADC operation.

• So as temperature increases, the analog output from sensor increases from 0 to 1 V and arduino generates corresponding digital value from 0 to 1023.

• So Arduino reads analog voltage output from sensor, gets analog value between 0 to 1023 divide it by factor 10.31 and displays this value on LCD as current temperature.

For complete above circuit operation, the program is downloaded into Arduino microcontroller ATMega328. The program is edited and compiled in Arduino IDE. And then it is uploaded to Arduino board.