Arduino is a very powerful hardware+software tool for rapid prototype development based on microcontrollers and embedded systems. It is very widely used nowadays for many different embedded applications. It is the first choice for hobbyists, trainers, teachers, students, scientists and even professionals for developing any embedded system application. 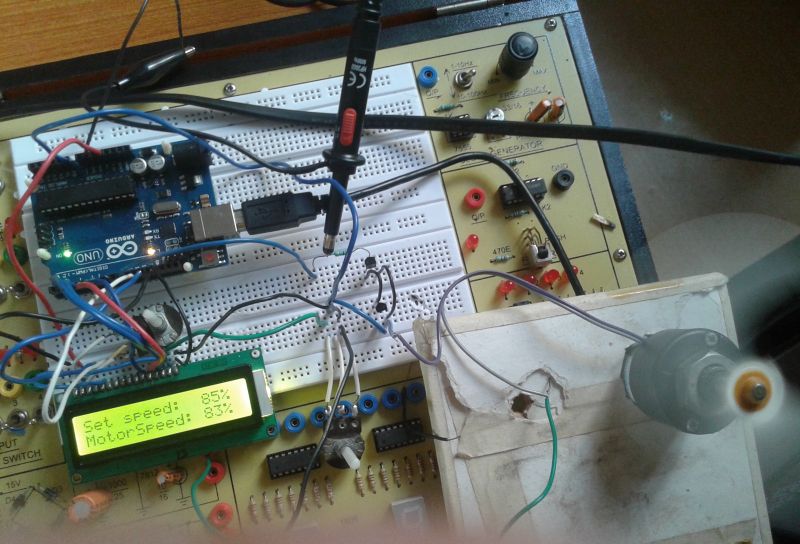 2. A 10K pot is connected to 3rd pin VEE of LCD to vary its brightness. LED+ terminal and LED- terminal are connected to +5 V and ground to turn on LED backlight.

3. Connect pot to an analog input pin A0 as shown. Connect its sliding terminal to A0 and other two terminals to +5 V and ground.

5. DC motor is connected between the collector of TIP122 and 12 V external power supply.

• As the pot is varied, it will vary analog input voltage to A0 pin. When it is varied from min to max the analog input to pin varies from 0 to 5 V. Arduino will read this analog voltage and convert it into digital value from 0 to 1023.

• This analog input is used to vary the width of the output pulse on analog output pin 9. The pulse width is also varied from 0 to 100% as the pot is varied from min to max.

• Because this PWM output is given to DC motor through TIP122, the motor speed increases as pulse width increases and vice versa.

The program does the following tasks -:

The program is edited and compiled in Arduino IDE software. Then it is uploaded into Arduino board microcontroller ATMega328.