Digital compasses are electronic devices that use sensors to determine the magnetic field, displaying the navigational direction numerically.

The HMC5883L shares the magnetic field values, in 16-bit resolution, using the I2C serial communication protocol. These values can then be used to compute the heading direction and heading degrees. 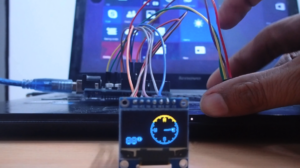 The HMC5833L can be easily interfaced with Arduino via the I2C port.

For this project, we’ll design a digital compass using the HMC5833L and SSD1306 OLED (organic light-emitting diode). The OLED display shows the heading degrees and a graphical compass rose, which changes in real-time.

The HCM5833L breakout board has this pin configuration… 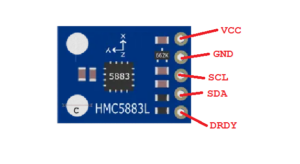 For the circuit connections, connect the HMC5883L’s VCC and GND pins with Arduino Uno’s 3.3V out and GND pin. It’s important to note that the HMC5883L cannot tolerate Arduino’s 5V supply and may get damaged if mistakenly connected to the 5V out. So, only use the 3.3V out.

The OLED display provides the compass’ digital graphics, including the heading degrees. The SSD1306 is interfaced with Arduino using its physical SPI port. How the circuit works
The HMC5883L outputs the magnetic field strength along three axes over the I2C protocol. The chip contains 12, built-in registers.

Arduino reads the values of the registers 0x03~0x08 and retrieves the magnetic field strengths along the three axes as 16-bit numbers. The values of the registers obtained are in 2’s complement. These raw values are converted to scaled values based on the compass calibration. The scaled values are then computed to calculate the azimuth angle or the compass direction.

Arduino is also interfaced with the SSD1306 OLED as the compass’ graphical display. The screen showcases a compass rose with an arrow direction. The heading direction obtained from the HMC5883L is displayed on the left half of the OLED screen and the arrow indicates the same degrees on the right half of the screen.

The function, compassCalibrate(), is defined for the manual calibration of the HMC5883L compass. Even if the call to this function is commented in the setup() function, the compass will still work with default values for the offsets. This function is used to manually compute the offset values with the help of the Serial Monitor.

The measured heading is adjusted to a value between 0˚ and 360˚. The heading value is in radian, which is converted to degrees. The OLED display is then cleared, and the obtained heading degrees are passed to the variable “angle.” This angle is displayed on the left half of the OLED screen as the heading degrees. The same angle is used to change the position direction arrow and the compass rose and direction arrow are displayed on the right half of the OLED screen.