A majority of middle-aged people suffer from health issues like asthma and breathing problems, particularly in cities. Air pollution is the major cause of it. In this project, we have designed a portable device that detects different air pollution metrics and displays them on a small OLED screen. People with respiratory issues can use the device to monitor pollution-related metrics and avoid hazardous places. The concept of this device can be integrated into consumer devices like a smartwatch or fitness watch. For measurement of air quality, the MQ-135 sensor needs to be pre-heat in clean air. After preheating for 24 hours, the value of R0 can be determined. MQ-135 air quality sensor has four pins – VCC, GND, Dout, and Aout. For preheating the sensor, connect VCC to Arduino’s 5V output, GND to Arduino’s ground pin, and Aout to any analog input pin of Arduino, like A4 in this project. These circuit connections are demonstrated below. Load the Arduino Sketch-1 to the board and leave it for 24 hours. Then, check the value of R0 from the serial monitor and disassemble the circuit. While building this project, the value of R0 was found to be 929.15Ω.

MQ-2 is also a gas sensor. It can be used to detect LPG, alcohol, hydrogen, methane, propane, and carbon monoxide concentrations in between 200 PPM to 1000 PPM. It is a Metal Oxide Semiconductor (MOS) sensor. It works by changing its resistance when the gas comes in contact with it. A voltage divider circuit detects the change in resistance. The sensor operates on 5V DC and consumes 800 mW power. The sensor has four pins –  VCC, GND, D0, and A0. The VCC should be connected to Arduino’s 5V output and GND to Arduino’s ground pin.  The D0 pin can be connected to any GPIO. It can be calibrated to provide a LOW output for a threshold level of gas concentration set by a potentiometer in the MQ-2 sensor circuit. The A0 can be connected to any analog input pin of Arduino and provides the value of gas concentration in parts per million (PPM) as a voltage reading. The 10-bit analog reading by Arduino is directly proportional to the gas concentration in PPM. 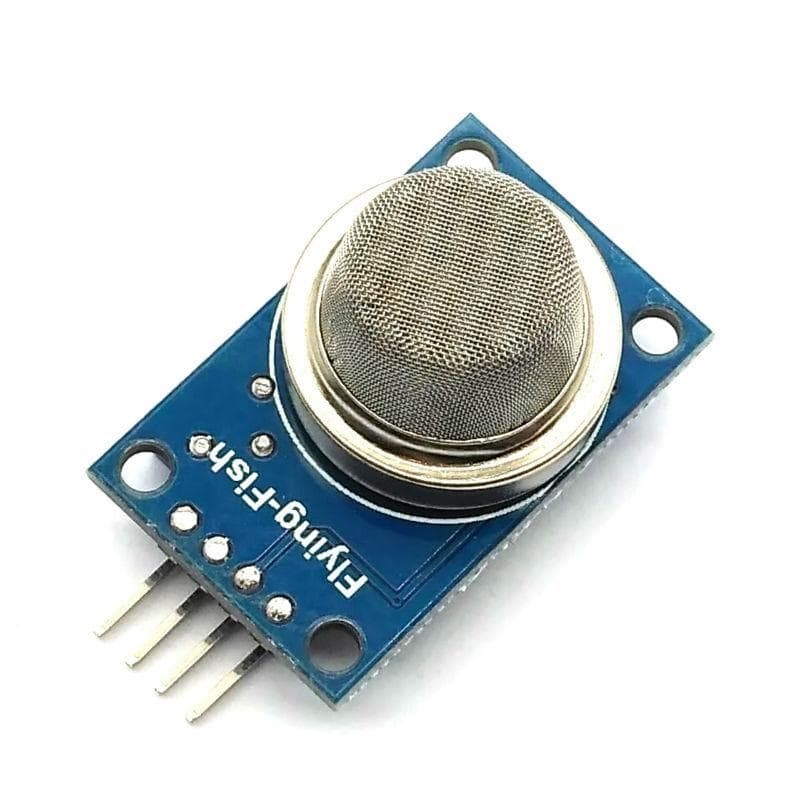 The GP2Y1010AU0F optical dust sensor has a six-pin connector with the following pin configuration.

SSD1306 is a popular OLED display. It is a single-chip CMOS OLED/PLED driver. It can manage a 128×64 dot-matrix graphic display.  It is designed to control common-cathode OLED panels. The chip has several built-in features like 256-step brightness control, display RAM, oscillator, and contrast control. These built-in features reduce the required external components and make the chip ready to use with any OLED screen of compatible resolution. In this project, we are using a 0.96″ OLED display having SSD1306 controller IC. The module has a Yellow-Blue screen with 128×64 screen resolution. The module used here has a 7-pin interface, allowing interfacing the module with Arduino using 3-wire SPI, 4-wire SPI, and I2C interface. The 4-wire SPI interface is the default interfacing option in the 7-pin module. The 7-pin OLED display has the following pin configuration.

In this project, a 7-pin SSD1306 OLED module is interfaced with Arduino UNO. The module is connected to the Arduino as follows.

For interfacing GP2Y1010AU0F optical dust sensor with Arduino UNO, make the connections summarized in the table below.

The device designed in this project detects air quality by measuring CO2 level, smoke, and dust density. It displays the measured metrics on the 128*64 SSD1306 OLED display. For measuring air quality, the MQ-135 sensor is used. The sensor is preheated for 24 hours to obtain the R0 value. The header file uses the value of R0 in the MQ-135 library. Once the actual R0 value is obtained, it is replaced with the default values in the MQ135.h file. The MQ135 library can be downloaded from this link. With a load resistance of 22KΩ, the MQ-135 sensor can be used to measure the concentration of CO2 in the air. The sensor is connected to Arduino’s A1 pin. The concentration of CO2 in the air is obtained using the getPPM() function of the MQ135 library.

At the same time, the MQ2 sensor is used to measure smoke particles. The density of smoke particles is measured in a range from 200 PPM to 1000 PPM. The analog reading from the sensor is directly proportional to smoke density in PPM.

The Arduino sketch begins with importing libraries for SPI communication and libraries required for SSD1306 OLED. The library for interfacing SSD1306 with Arduino is available from Adafruit. To find it navigate to library manager of Arduino IDE, Sketch -> Include Library -> Manage Libraries. Search for SSD1306 and select the latest version of the Adafruit SSD1306 library. It will also download the GFX library as one dependency. This is followed by the definition of RLoad and RZero constants for the MQ-135 sensor and the inclusion of the MQ-135 library. This MQ-135 library can be downloaded as a Zip file from this link and can be imported by navigating to Sketch-> Include Library -> add .Zip library. The variables are declared for storing sensor values and pin assignment for dust sensor, MQ-135, and MQ-2 sensor.

A function drawbm() is defined to show the EEWORLDONLINE logo on the SSD1306 OLED display. In the setup() function, the baud rate for serial communication is set to 9600 as all the pollution metrics are also communicated to the serial port for observation. The SSD1306 OLED display is initiated by calling display. Begin () function, and the EEWORLDONLINE logo is displayed on the screen. The MQ135 sensor pin is set as input, and the pin connecting to the LED of the dust sensor is set as output. The analog pin-connected MQ-2 sensor is also set as input.

In the loop() function, first of all, the dust level is calculated. The IR diode is turned ON for 280 microseconds for measuring dust level, and the output voltage from the photosensor is read. The reading output voltage from the dust sensor takes around 40 to 50 microseconds, so a delay of 40 microseconds is provided. According to the datasheet of GP2Y1010AU0F, the IR diode is pulsed every 10 milliseconds, so still, 9.68 milliseconds are left. The dust level is calculated using the following equations and printed to the Serial Monitor.

It should be noted that for displaying string values to OLED display, display.write() function is used while to display sensor values (numerical values), display.the print() method is used. A delay of 1000  milliseconds is provided to repeat updating of metrics every second.