The COVID-19 pandemic has severely affected the lives of millions across the world. It has caused a significant increase in the awareness of health and better hygiene. As a result, the electronics industry has experienced a rapid demand for touchless devices and appliances, such as contactless sanitizer or soap dispensers and automatic doors.

For this project, we’ll design a touchless bell push, which can be useful in homes or offices. The bell uses an ultrasonic sensor that can be easily assembled with little cost.

We’ve prototyped the touchless bell push using Arduino, which means the code can be ported to any Arduino-compatible platform.

Circuit connections
To assemble the touchless bell push, an HC-SR04 ultrasonic sensor and a buzzer are interfaced with an Arduino board. Arduino UNO is used for this project. 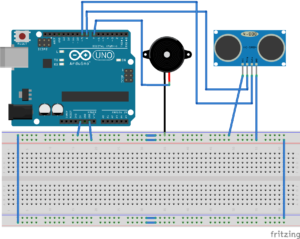 How the circuit works
The touchless bell push lets a user ring the bell without touching it. The HC-SR04 ultrasonic sensor is interfaced with Arduino to allow for contactless operation.

The sensor can detect an obstacle or object that’s up to 400 cm away. It consists of two ultrasonic transducers: one that transmits 40 kHz ultrasonic sound pulses and another that “listens” for the pulses that vibrate off of the obstacle or object. By measuring the width of these received pulses, the sensor assesses the distance from the object.

The HC-SR04 is capable of non-contact detection at a distance ranging between 2 and 400 cm with an accuracy of 3 mm. The sensor requires 5Vs of operating voltage, which is compatible with most microcontrollers and Arduino boards.

For this project, the HC-SR-04 is only used for non-contact detection up to 10 cm. This distance is adequate for use of the contactless bell as a doorbell or desk bell.

A piezo buzzer is interfaced with Arduino and it works as the bell. It’s wired to ring when a LOW logical signal is output from Arduino’s interfaced pin. It stays silent when a HIGH logic is applied from the Arduino pin to the buzzer terminal.

Arduino is programmed to ring the buzzer when the ultrasonic sensor detects interference at a distance of less than 10 cm. The buzzer sounds because of the application of a combination of square-wave frequencies at short intervals. These square waves are generated by Arduino’s GPIO digital output.

How the code works
Begin the Arduino sketch by importing the NewPing library. This library is useful for interfacing the HC-SR04 ultrasonic sensor with Arduino. The library can be downloaded as a ZIP file from the above link.

To install the library, simply open the Arduino IDE, go to Sketch > Include Library > Add .ZIP Library, and then select the NewPing ZIP file that you just downloaded.

Follow this step with the pin assignments, interfacing the sensor’s trigger and echo terminals with the buzzer.

Then, an object “sonar” (from the NewPing class) must be instantiated. And, a variable “distance” must be declared to store the distance of the non-contact detection and a variable “I,” which runs the counters. 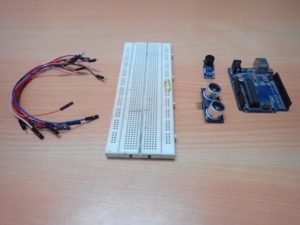 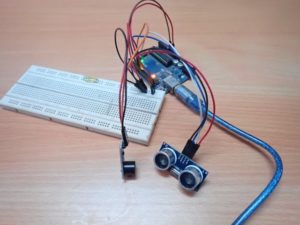