In the previous tutorial, we discussed:

In this tutorial, we will learn about scrolling long string of text on a character LCD, which can be tricky. A character LCD module has a small amount of RAM that can store text and supports the continuity of text scrolling across an LCD display. However, this requires a careful design of the embedded program.

In this tutorial, we will flash a long string of text on a character LCD from Arduino and review the different steps and concerns that should be considered.

If you want to display and scroll text greater than 40 characters on a line of 16×2 LCD, the only way to do so is to break the original string into parts and write those parts of the text string to the DDRAM one by one, scrolling each part of the text string.

The above string has 120 characters. Since only 40 characters can be written to the DDRAM at one time, 15 characters must be repeated from the previous text segment to maintain the continuity of text on a 16×2 LCD.

This means the above string must be broken into following strings to scroll across a line of 16×2 LCD:

To display and scroll the above-given text string of 120 characters on a 16×2 LCD, it’s necessary to break it into five text segments of 40-character lengths (except for the last one) — with 15 (16-1) characters repeating in each consecutive segment. This is because each line displays 16 characters at a time while scrolling one character at a time.

If you’re not adding any padding between the repeated text scroll, the text segment “5” needs to be scrolled 21 times (the length of the segment), or at least five times (21-16) as per choice.

Scrolling long text
The LiquidCrystal library of Arduino has a number of functions that can be used to scroll text on a character LCD.

These methods are useful in scrolling text across an LCD display:

After writing each segment, it can be scrolled with the help of any of the above-listed functions.

It should be noted, however, that for scrolling text on the LCD, S/C, and RL bits of the “cursor or display shift,” the LCD command is set. Visit the previous tutorial to learn about LCD commands.

The scrollDisplayLeft() method
This function scrolls the content from the display (the text and cursor) one space to the left. It needs no arguments. It simply scrolls the text written to the DDRAM by one space from the current DDRAM address (as in the address counter of the LCD).

This function has this syntax:

lcd.scrollDisplayLeft() // lcd is an object of LiquidCrystal Class

Additionally, it has this source code:

This function uses a “command() function,” which is used to send the LCD commands to the character LCD.

The scrollDisplayRight() method
This function scrolls the content of the display (the text and cursor) one space to the right. It needs no arguments. It simply scrolls the text written to the DDRAM by one space from the current DDRAM address (in the address counter of the LCD).

This function has this syntax:

lcd.scrollDisplayRight()   //lcd is an object of LiquidCrystal Class

Additionally, it has this source code:

The leftToRight() method
This function sets the direction of the text on a character LCD from left-to-right. It is the default direction of text. After calling this function, when the characters are written on the DDRAM of LCD, the characters will display from left to right. This function does not affect any previously displayed text. It only affects the text that’s passed to the LCD (via print or write function) after calling it.

lcd.leftToRight()   //lcd is an object of LiquidCrystal Class

lcd.rightToLeft()   //lcd is an object of LiquidCrystal Class

The autoscroll() method
This function serves to auto scroll the text of the LCD. The default direction of the text is from left to right. The direction of scrolling the text can be set using the leftToRight() function or the rightToLeft() function.

On calling this function, the text is scrolled from left-to-right or right-to-left by one space, according to the direction of text. Additionally, this function scrolls the text that’s written in the DDRAM. It does not alter the content of the DDRAM.

lcd.autoscroll()   //lcd is an object of LiquidCrystal Class

The noAutoscroll() method
This function turns off the automatic scrolling of the text on the LCD.

lcd.noAutoscroll()    //lcd is an object of LiquidCrystal Class

The command(), write() and send() methods
All of the functions used to scroll the display of the character LCD use the command() method. This method is used to pass the LCD commands to the LCD module.

The command(), write() and send() methods have these source codes: 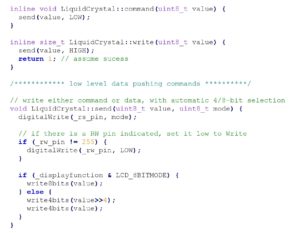 The recipe
In this recipe, we will scroll long text of strings on a 16×2 character LCD. Two different strings will be scrolled on two lines of the 16×2 LCD.

The R/W pin is connected to ground because Arduino will only write data to the LCD module. The RS, EN, DB4, DB5, DB6, and DB7 pins of the LCD are connected to pins 13, 11, 7, 6, 5, and 4 of Arduino UNO, respectively. The breadboard is supplied to the common ground and the 5V supply rail from one of the ground pins and the 5V pin of Arduino UNO. 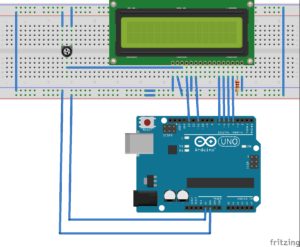 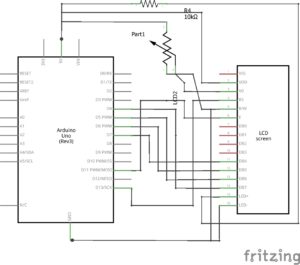 How the project works
The goal is to display two strings on a 16×2 LCD module. One of the strings just displays the text “EEWORLDONLINE” on line 0 of the LCD. While scrolling on the display, this text must also scroll continuously on line 0. The text is repeated in a long string with two spaces between each repetition of the text.

The second string contains the names of websites from the EE Network with WTWH Media LLC, which include:

The second string is 269 characters long and contains this text:

To display the scrolling text on line 0, the following text segments are forwarded to the character LCD:

After the third line segment, the string segments 1 to 3 begin repeating to enable the repeating text display, “EEWORLDONLINE.” All of the above three text-segments are 40-characters long and need to be scrolled 24 times (40-16) on a line of the 16×2 LCD.

To display the scrolling text on line 1, the 269-characters string is broken into following 40-character text segments”

All of the text segments are 40-characters long except the last one because the maximum capacity of the LCD’s DDRAM is 40 characters per line. Each subsequent text segment starts by repeating the last 15 characters of the previous text segment to ensure continuity of the scrolling text on the display.

The result is a scrolling display on 16×2 LCD that highlights EEWORLDONLINE on line 0 and all of the websites that are a part of the EE network on line 1. 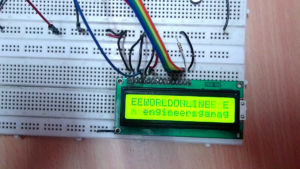 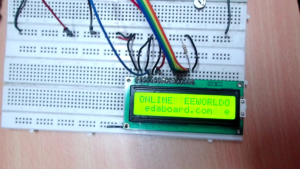 In the loop() function, the LCD display is first cleared using the clear() method, and the cursor is set at column 0 of the line 0, using the setCursor() method.

Next, a for loop is run in which the entire display is shifted left by using the scrollDisplayLeft() method 24 times. After scrolling the display on the LCD, a delay of 300 milliseconds each time is provided using the delay() function.

To keep things simple, the last text segments on lines 0 and 1 are also kept to the same length.

The body of the loop() function keeps repeating itself until Arduino is shutdown. Therefore, both long strings keep scrolling on lines 0 and 1 of the LCD module.

Arduino lacks support for C-style string manipulation functions. Otherwise, the sketch could be reduced to a few lines by storing the entire string to a variable and then trimming the string in each step for passing to the DDRAM of the LCD module. Even if the standard C’s string library might have been supported, the use of the string manipulation function would have increased the footprint of the embedded program.

In the next tutorial, we will discuss how to display custom characters on the character LCD.