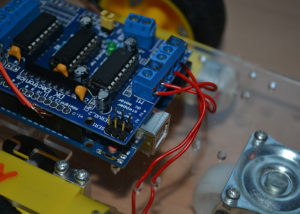 The previous tutorial included a discussion about the tools and components necessary to get started with Arduino. However, before starting with Arduino UNO (or any other Arduino board) — and experimenting with hardware projects on various sensors, actuators, and modules — it’s important to get through the basics of Arduino sketches and the embedded C for Arduino-compatible coding.

Much like other microcontrollers, the AVR microcontrollers housed in Arduino boards are programmed in a subset of C. A general term for such subsets is “Embedded C” because they apply to programming embedded controllers. The language in which Arduino is programmed is a subset of C and it includes only those features of standard C that are supported by the Arduino IDE.

This does not mean that Arduino C lags anywhere because it is a subset of C. Most of the missing features of standard C can be easily worked around. Rather, Arduino C is a hybrid of C and C++, meaning it is functional and object-oriented.

The structure of sketches
Essentially, a blank Arduino sketch has two functions:

As the Arduino sketch starts executing, the setup() function is called first. It’s executed only once and must be used to initialize variables, set pinModes, make settings for hardware components, use libraries, etc.

The loop() function is next to the setup() function and it is iterated infinitely. Any other user-defined functions must be called inside the loop function. This is how microcontrollers execute their firmware code by repeating their code for an infinite number of times while they remain powered on.

If users have programmed other microcontrollers (such as 8051, AVR, PIC, or RX), it’s possible to compare the code inside the setup() function with the one outside of the main() loop of an embedded C program — which may have been written to initialize variables and make hardware settings. The setup() and loop() functions have void return types.

A microcontroller can interact with other hardware components or devices only through these five ways:

Users that know how to perform these five types of microcontroller interactions can interface any hardware with it.

An Arduino program or any microcontroller program must first have code for initialization. This may include:

A microcontroller simply intercepts incoming data, processes it according to programmed instructions, and outputs data through its I/O peripherals. This means the program must be organized in specific sections that can handle input data, process data, and control output.

Unlike desktop applications, µc programs are not designed to terminate. These programs keep iterating for an infinite number of times until the system is shut down or it meets failure. After a power shutdown, Arduino or any microcontroller resets on the “power resume” and begins execution of its program from the beginning.

The program includes code to handle failures when possible. So, any Arduino program can be visualized as a four-step program as follows:

These are examples of single and multi-line comments: 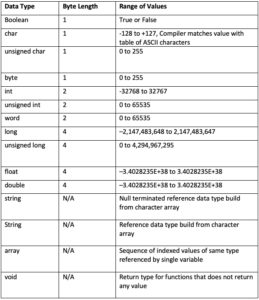 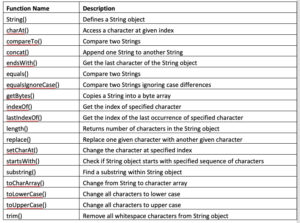 Identifiers
Identifiers are names given to variables, functions, constants, classes, methods, and other objects in a program. In Arduino C, identifiers should contain only alphanumeric characters, dash (-), or underscore(_). An identifier can only start from an underscore or a letter.

Keywords
Keywords are constants, variables, or function names that cannot be used as identifiers.

Arduino C has the following keywords: 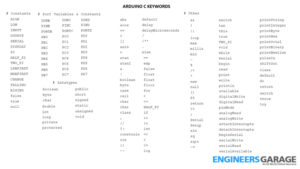 Variables
Variables are references in a program with values that can change during the execution of the program. Variables can have names that must be identifiers.

For example, in Arduino C, each variable must be explicitly defined with a specified data type before it’s used in the code.

This is a valid definition of a variable:
int num1;

This is a valid declaration of a variable:
int num1 = 0;

Constants
Constants are references in a program with a value that does not change during the execution of the program. The integer and floating-point constants can be declared in Arduino C using const keyword or #define directive. T

This is an example of a valid declaration of an integer constant:
const int RXPIN = 0;

Some built-in constants are HIGH, LOW, INPUT, OUTPUT, INPUT_PULLUP, LED_BUILTIN, true, and false. The #define directive allows for declaring constants before the compilation of the program.

This is a valid declaration of a constant using #define directive:
#define LEDPin 3

Operators
These operators are available in Arduino C:

7. Cast – These operators translate current type of a variable to another type. Type casting can be applied to a variable by indicating the new data type in parenthesis, before the appearance of the variable.

8. sizeof – The sizeof operator returns the size of an array in the number of bytes.

Operator precedence
This table shows the precedence of operators in Arduino C in descending order: 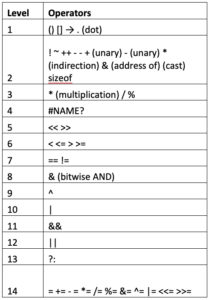 User-defined functions
Functions are callable blocks of statements. Programmers can also write their own functions. Functions are an ideal way to organize code according to the functionality of statement blocks in the program.

The function exits after the return statement. If the type of a function is void, it should not return any value. The function name can be any identifier, and may or may not need arguments. The arguments are variables that are bound to the function.

This is a valid example of user-defined C function:
int add_inputs(int a, int b, int c) {
return a+b+c;
}

A function is called by its name and followed by a parenthesis. Any positional arguments must be passed within parenthesis. 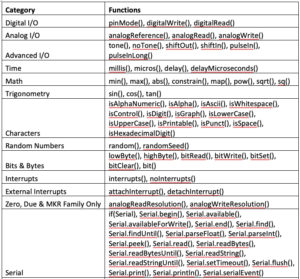 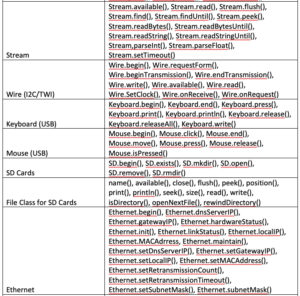 A variable having global scope must be defined or declared outside of any function, including setup() and loop() functions. If a local variable is defined as static (using the static keyword), it remains visible to only one function. However, it’s not destroyed and will persists beyond the function call, preserving its data between function calls.

If a variable (local or global) is defined as volatile, it’s stored in RAM instead of storage registers. A variable must be defined as volatile if it’s likely to be changed beyond the control of the code (such as in the case of an interrupted service routine).