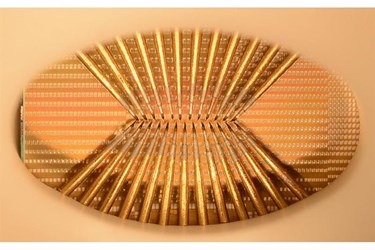 A team of scientists in Zurich recently created some artificial neurons that are capable of storing and processing data. The new innovation is being defined as next step in direction of ultra-dense, energy efficient neuromorphic technologies that can have new applications in the cognitive computing domain. These artificial neurons are constituted by phase-changing substance along with germanium antimony telluride. These materials for the base for re-writable Blu-ray discs. The neurons are known for storing analogue information for now, digital information is yet to become their cup of tea.

The team that built these neurons applied an electrical pulses series to the artificial neurons that resulted in a progressive crystallization of phase-changing substance compelling the neuron to fire. This process forms the base for event-based computation. Evangelos Eleftheriou, explains, “In the past 24 months, we have discovered new memory techniques, including projected memory, stored 3 bits per cell in phase-change memory for the first time, and now are demonstrating the powerful capabilities of phase-change-based artificial neurons, which can perform various computational primitives such as data-correlation detection and unsupervised learning at high speeds using very little energy.”

Mirroring various computational capabilities of large number of neurons has been a challenge for the researchers since the beginning of this process. The amount of power and density required for this is really limitless. For now, the geek team from IBM has organized large number of neurons in form of populations and is now using those to represent complex and rapid signals. Artificial neurons are capable of switching between billion sof signals that would means years of operations at a frequency of 100Hz. The energy needed for every neuron update is less than 5pJ while the overall power requirement is less than 120µW.