Multivibrators are another form of oscillators. Oscillator is an electronic circuit that is capable of maintaining AC signal at the output. It can generate a square wave, ramp or pulse waveforms. For oscillation, the oscillator must fulfill two Barkhausen conditions:

 The loop gain must be slightly greater than unity

 The loop phase shift must be 0 degrees or 360 degree
To fulfill both the conditions the oscillator must have some form of amplifier and a portion of its output must be fed back re-generatively to the input. If the gain of the amplifier is less than unity, the circuit will not oscillate and if it is greater than unity, the circuit will be over driven and produce a distorted waveform. A simple oscillator can produce sine wave but it cannot generate a square wave. The square wave can be generated by use of multivibrator.
A multivibrator is a form of the oscillator which has two stages due to which we can get output by either of the states. It is basically two amplifier circuits arranged with regenerative feedback. In this, neither of the transistors conducts simultaneously. At a time, only one transistor conducts and another one is in off state. Some circuits have certain states; the state which has fast transition is called switching processes,  where there is fast change of current as well as voltage. This switching is termed as triggering. Hence, we can trigger the circuit internally or externally.
Circuits have two states -:
One is stable state in which a circuit remains forever without any triggering.
Another state is unstable state: In this state the circuit stays for a limited period of time without any external triggering and switches into another state. Hence the use of multivibartors are in two states circuits like timers and flip flop.
Astable multivibrator using transistor
It is free running oscillator which switches continuously between its two unstable states. With no external signal applied, the transistors alternately switch from cutoff to saturation state at a frequency determined by the RC time constants of the coupling circuits. If these time constants are equal (R and C are equal) then a square wave will be generated with a frequency of 1/1.4 RC. Hence astable multivibrator is called pulse generator or square wave generator. The larger the value of base load R2 and R3 w.r.t collector load R1 and R4, the larger is the current gain, and sharper will be the waveform edge.
The basic principle of the Astable multivibrator is a slight variation in the electrical properties or characteristics of the transistor. This difference causes one transistor turn ON fast than the other when power is applied for the first time, thereby triggering oscillations.
Circuit Explanation
 The Astable multivibrator consists of two cross-coupled RC amplifiers.
 The circuit has two unstable states
o When V1 = LOW and V2 = HIGH then Q1 ON and Q2  OFF
o When V1= HIGH and V2 = LOW then Q1 OFF and Q2 ON
 In this R1  = R4 , R2 = R3, R1 should be greater than R2
 C1=C2
 When the circuit is first powered up  then neither of the transistors is ON
 The base voltage of both the transistor starts increasing. Any one of the transistor turns ON first due to the difference in doping and electrical characteristics of the transistor 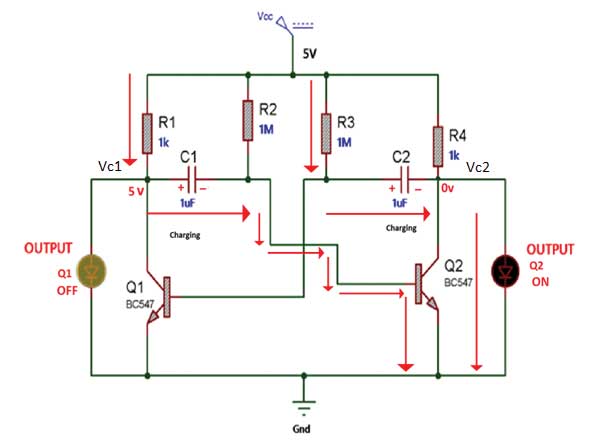 Fig. 2: Circuit Diagram showing Working of Transistor based Astable Multivibrator
 Now Q1 conducts and Q2 is OFF. The above sequence repeats and we get a waveform at both collectors of the transistor which is out of phase with each other
 For getting a perfect square wave by either collector of transistor we take both transistor collector resistance, base resistance equal i.e. (R1=R4), (R2=R3) and also the same value of capacitor which makes our circuit symmetrical. Hence duty cycle for the low and high value of output waveform is same which generates a square wave
 The time constant of the waveform depends on the base resistance and collector of the transistor. We can calculate its time period by : Time constant = 0.693RC