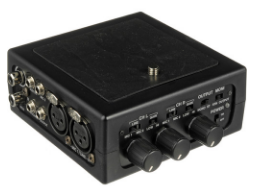 For this project, we’ll design a two-channel audio mixer, which combines two signals into one. One of the audio sources will be taken from a smartphone and the other will be from a microphone. The microphone’s audio will be amplified to line level by a pre-amplifier before it’s combined with the smartphone’s audio using an op-amp circuit.

The combined audio will, then, be played on a speaker. So, for example, one will be able to mix vocals with an audio track when using this mixer. It can be used for audio recording, concerts, DJ-related work, and for public announcements.

A pre-amplifier and power amplifier are the main building blocks of the circuit. We’ll be using some common terms associated with audio amplifiers and filters, which are covered here. 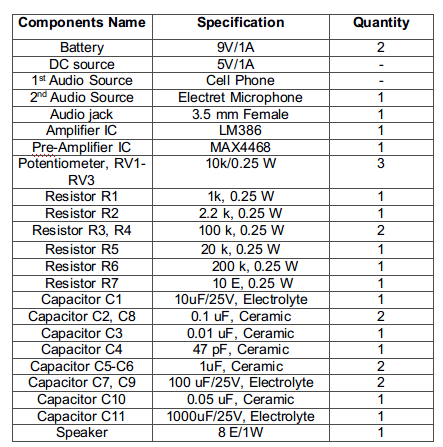 Circuit connections
The audio mixer combines two or more audio signals by using a summer, which mixes multiple input signals together. These mixed signals are, then, amplified via a power amplifier at the output for a combined sound.

This audio mixer circuit is built by assembling the following components:

Power supply –  The pre-amp for the microphone requires a 5V DC and the power amplifier is powered by a 9V DC in the circuit.

Smartphone – To receive audio from the smartphone, a 3.5 mm audio jack must be plugged into it. The jack should have three wires: one to ground, one for the left channel, and a third for the right channel. In this circuit, only one of the channels is used as an audio source. The ground wire of the jack is connected to the common ground of the circuit. 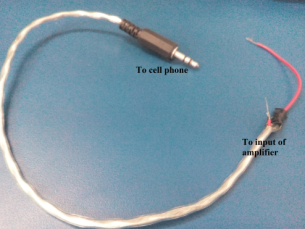 Volume control – To control the volume input through the smartphone, a variable resistor (“RV1” in the circuit diagram) is connected between the audio jack and the power amplifier. By adjusting this resistor, it’s possible to adjust the smartphone’s volume.

Microphone – An electret microphone, a type of electrostatic capacitor-based mic, is used as the input source for the second audio signal (as there are two). It requires a biasing voltage between 1 to 5V to power the inbuilt FET buffer, which has an extremely high input resistance and a low output resistance.

Typically, this microphone is powered by 1 V to 5 V DC through a resistor with a value between 1K to 10K ohms. So, there must be sufficient voltage at the bias pin of the microphone so it could obtain the audio signal. 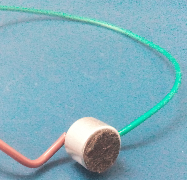 The biasing circuit for this microphone: 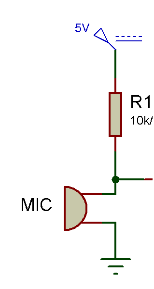 MAX4468 microphone amplifier – The MAX4468 is a low-cost, micro, power microphone pre-amplifier. This IC operates over a supply voltage, ranging from 2.4 to 5.5 V, while providing high voltage gains of up to 125 dB.
The MAX4468 IC has these pin configurations: 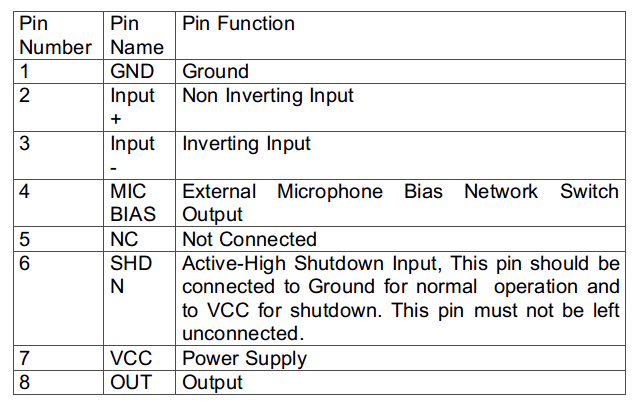 The IC pins are similar to the op-amp’s pins except for the microphone bias pin. The IC is in an SMD package and has the following pin diagram:

However, this phase inversion does not affect the audio signal as humans will only respond to the intensity of the sound. The intensity is the energy flowing through an area in a given time, expressed in joule/s/m2. The energy of the wave is proportional to the square of its amplitude.

So, for a unit area, the intensity is also proportional to the square of the amplitude.

You’ll note that changing the sign of wave has no effect on I.

The typical application circuit (as per the MAX4468’s data sheet) is used for designing the pre-amplifier.

The line output is drawn from the IC’s pin 8. The circuit diagram of the MAX4468 IC-based microphone audio pre-amplifier. 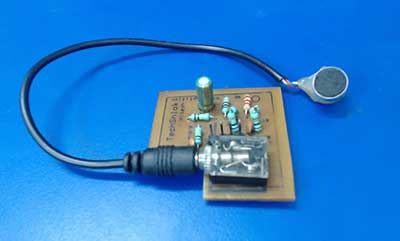 A profile of the MAX4468 IC-based microphone audio pre-amplifier.

Volume control – To control the volume input through the microphone, a variable resistor (“RV2”) must be connected between the pre-amp output pin and the power amplifier. By adjusting this resistor, the microphone’s volume can be adjusted.

Summer and the LM386 power amplifier – The two audio sources (the microphone and audio track) require a summer for mixing. The LM386 IC will serve as the summer and power amplifier.

The LM386 is a low-voltage audio power amplifier IC, which operates at a voltage ranging from 4 to 12 V. In this circuit, the IC receives a bias voltage of 9 V. The IC can drive a load with an impedance ranging from 4 to 32 ohms, which is well-suited to the output speaker as it has 8 ohms of impedance.

The IC has 8 pins in a PDIP package with the following configurations: 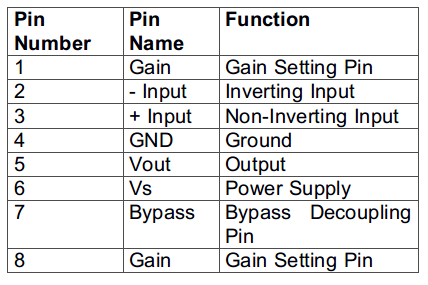 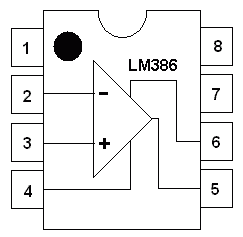 The IC has the following internal diagram: 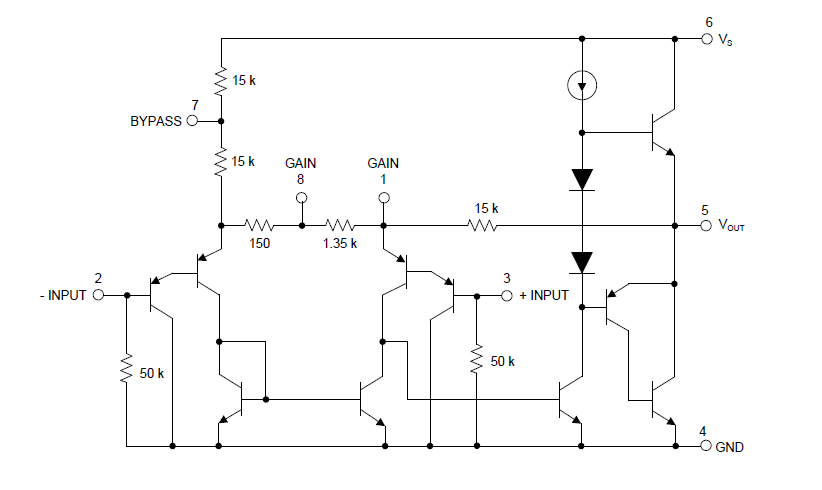 Its internal circuitry can be represented by this functional diagram: 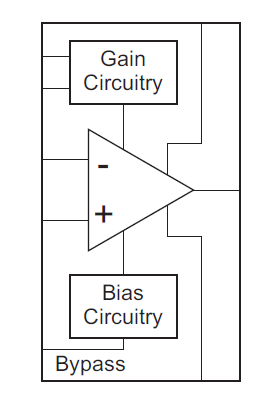 Here’s what you need to know about the setup of the pins: The circuit diagram of a 1-watt audio power amplifier. 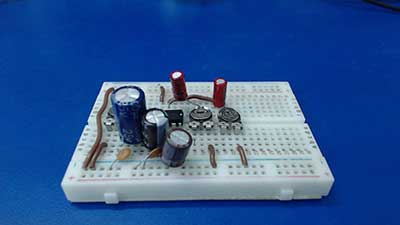 The LM386 is also used to choose the output power of the mixer circuit. For this project, it will provide a power of approximately 700 mW for a load of 8 E at a supply voltage of 9V.

Since the output power of the circuit is about 1 watt, so,  a speaker with a minimum of 1 watt or greater should be used. Here, we used an 8E 10-watt speaker. A variable resistor (“RV3”) is connected before the speaker to adjust its output volume.

You can learn more about speakers here.

Safety first
When assembling this circuit, follow these precautions…

1. Always use the filtering capacitor at the power supply’s input terminal to avoid unwanted ripples.
2. Select a speaker that’s equal to or of a high power-rating as the amplifier’s output power.
3. Use a series capacitor at the output of the amplifier to block any DC components.
4. Employ the Zobel network for frequency stability.
5. Calculate the maximum power rating of the amplifier before connecting it to the speaker. The practical value may differ from a theoretical one.
6. Double-check the power rating of LM386 IC by referring to its data sheet, as different companies have different ratings.
7. Avoid clipping the output signal as it may damage the speaker.
8. Place the components as close as possible to one another to reduce the noise in the circuit.

How the circuit works
This mixer circuit receives audio from two different sources: a smartphone and a microphone. A MAX4468 pre-amp is used to amplify the audio input from the microphone to line level before directing it to the power amplifier.

The audio from both sources is fed to the power amplifier IC’s non-inverting pin. The amplifier also works as summer and combines the two audio signals. The audio waveforms from the microphone, audio jack, and power amplifier output pin can be observed by connecting CRO probes.

The audio waveform from the microphone is:

The audio waveform from the smartphone is:

The mixed waveform from the power amplifier is: 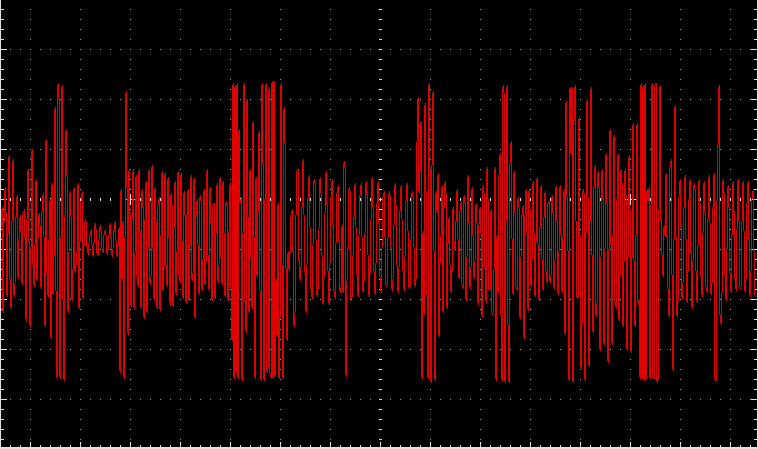 The audio mixer designed in this tutorial is a two-channel mixer. It has an output power of 1 watt, with volume control at the input and output.
Filed Under: Tutorials