In Part 1 and Part 2 of this series, we covered the physical properties of sound and acoustic waves. In this tutorial, we’re learning about the importance of converting sound into electrical signals.

As sound waves present in vibration form, they first must be electrically converted to be processed by electronic circuits. As mechanical energy, sound must be precisely represented as an electrical waveform (analog) for any successful signal-processing operations.

In the air medium, the device used for converting sound waves into electrical (audio) signals is likely familiar to you — it’s called a microphone.

The term “microphone” was first coined in 1875. It’s a combination of “microscope,” in reference to magnifying an item, and “telephone,” in relation to transmitting sound. A microphone is a device that converts speech or sound into electrical signals. It’s used for several purposes, including radio, television, recording, live music, VOIP, and others.

How microphones work
A microphone is a type of transducer, which is a device that converts one form of energy into another. More specifically, it converts mechanical energy (wave forms) into electrical energy.

Different microphones use different methods for converting the energy but they all use a diaphragm, which is a thin membrane that vibrates in the presence of sound waves. When the diaphragm vibrates, this typically affects another component — such as a coil in a dynamic microphone or a plate in a condenser microphone.

The coil, for example, is also bound to a magnet, which produces a magnetic field. Whenever the coil in a dynamic mic moves in the magnetic field, it creates an electrical current. This electrical signal is produced from the microphone, which is passed on to the amplifier (or a preamplifier).

Now, let’s review how the different types of microphones work.

Classification of microphones
Microphones are typically categorized based on two features: the conversion technology used and their application.

The types of conversion technology include:

Dynamic microphones – A simple microphone that uses a coil and magnet to convert sounds into electrical signals, based on the principle of electromagnetic induction. A coil is attached to the diaphragm, which is surrounded by a permanent magnet. When the diaphragm vibrates, the attached coil also vibrates. An electrical signal that’s proportional to the vibration is, then, generated.

The inner working of a dynamic microphone 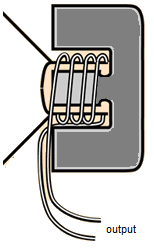 Condenser microphone – This type of microphone uses two plates — one is stationary and the other one act as the diaphragm. Any sound pressure changes the spacing between the two plates, which also alters the capacitance between them.

These plates are powered with a charge, represented by the following equation:

Whenever the space between the plates changes, the Q charge is stored between them and this causes a current in a resistance that’s connected in series with the capacitor.

The inner working of a condenser microphone

Ribbon microphone – These microphones have a metallic ribbon, suspended between a permanent magnet. Whenever sound waves hit the ribbon, it vibrates. As the ribbon is in a magnetic field, any vibration induces a voltage.

The voltage produced is proportional to the velocity of the ribbon. The voltage is also the audio signal received from the microphone.

The inner working of a ribbon microphone

The amount of deformation is proportional to the voltage generated, which is received by the microphone (as an audio signal). them whenever the stress is removed from the material, the voltage dissipates.

The inner working of a crystal microphone

Microphone applications
Microphones have different directional properties, frequency responses, and impedances. These devices can pick up sounds from one direction or multiple directions (omni-directional), depending on their features and application.

How a microphone “picks up” sounds is referred to as its pattern. In terms of this pattern, microphones can be categorized as follows…

Microphones also display one of three distinct polar patterns. A polar pattern is a visual graph that indicates the sensitivity of a diaphragm at different angles.

By combining the directional property and the polar pattern that a microphone’s “pick-up” pattern is determined. The pick-up pattern refers to the sensitivity of the diaphragm and demonstrates how well a microphone will pick up sounds from different directions and angles.

In terms of its pick-up pattern, microphones can be categorized as follows…

1. Omnidirectional – sensitive to all directions at all angles, equally.

2. Bidirectional or figure-of-eight – sensitive to two, opposing directions, which are either the front and back, or the left and right sides of the microphone. This sensitivity is equal at all angles.

3. Cardioid – extremely sensitive at the front of the microphone, with decreasing sensitivity at the sides, and very little at the back. They provide isolation from unwanted ambient noises and are ideal for loud sounds.

4. Hyper-cardioid or mini shotgun – sensitive in the front and back, but with a narrow range of angles at the front.

5. Half or sub-cardioid – sensitive at the front with minor sensitivity in all other directions — which is a mix of a cardioid and an omnidirectional microphone. They’re ideal for use when the source of audio is moving and never stationary.

6. Super-cardioid or shotgun –  narrow sensitivity angles at the front and even more so at the back. These mics are good at picking up precise sounds.

7. Lobar or unidirectional – strong, directional microphones with narrow pick-up patterns. They’re quite particular and are primarily used for video production.

Symbol of a unidirectional microphone.

Line levels
The output level of a microphone level is an extremely weak signal (only -60 dBm). However, the output strength can be increased by using a preamplifier (also known as a preamp), which sets the input signal to the line level.

The line level is the standard strength of an audio signal required to transmit the signal between audio sources to amplifiers, radios, TV, DVD players, etc. The typical line level voltage is 0.316 to 1.228 V.

Therefore, a preamp circuit is necessary in a microphone’s circuitry to convert its level to the line level.

In the next tutorial, we’ll discuss another important part of an audio system: the speakers.
Filed Under: Tutorials