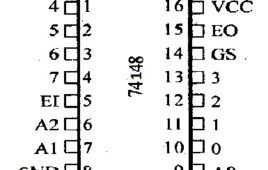 A 3:8 priority encoder(near the tank) is used to measure the level of water in the tank,then encode it and transmit into the 8:3 decoder,which is  in the house the highest level upto which water is filled up,that level is only considered by the encoder,and it encodes it.when the water level increases  the water measuring level contacts are short circuit ed,and current flows to the data pins of the ic. Since the conductivity of water is  low,so it is not easy for elctrons  to cross the water.So multiple wires contacts  are used at every contacts so that electrons can pass through water easily.One end of it is connected to vcc and the other to the data bits.since multiple wiresa are used,each wire will be eroded in a less amount,thus increasing its lifetime