The Wikipedia definition yields “It is an open and standardized automotive software architecture jointly developed by automobile manufacturers, suppliers and tool developers”

In plain words, AUTOSAR is a common platform across the whole automotive industry which will enhance the scope of applications of vehicle functionalities without disturbing the existing model.

AUTOSAR works on below mentioned principle –

“Cooperate on Standards, Compete on Implementation “.

The sole objective of AUTOSAR is to establish a common standard among the manufacturers, software suppliers and tool developers, retaining the competition so that the end outcome of business is not altered in the process.

The need for AUTOSAR:

One might wonder does automotive industry really needs such a complex infrastructure? .With the  increase in demand for intelligence and  more safer ,smarter vehicles  the competition is only going to increase in coming days. All the intelligence and vehicle functions are not implemented by single authority, i.e.: Consider a Car X, which has Airbags, Electronic injection system, etc. All of these individual features are implemented on different ECUs by different automotive industries. The way each of them are implemented are no longer independent.

The same holds good for software development process even. Until recently the software developed were only targeted to deliver the intended functionalities without taking into account of how it effects the system. To further complicate matters a lot of functionalities are distributed over various ECUs across different vehicle networks (CAN, LIN, MOST, etc.). This became a more critical problem with the increase in non-standard development procedures. These formed underlying reasons for emergence of AUTOSAR.

In a nutshell why AUTOSAR?

a.       Demands for more services, security, economy and comfort.

b.      Increase in complexity due to increase in number of ECUs and growth of software sharing and functionality. 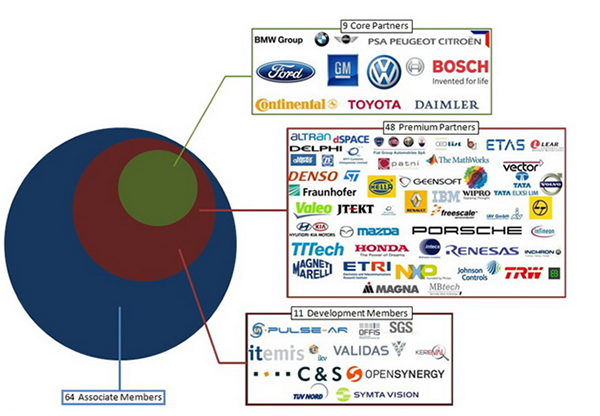 ·         Consideration of availability and safety requirements

What are expected outcomes of AUTOSAR?

·         A standard platform for vehicle software

·         An OS with basic functions and interface to software

·         Functionality is supplied as software components

·         These components are hardware independent

·         More than one supplier can compete with their software

The fundamental concept in AUTOSAR is separation of Application and Infrastructure.

However each component is implementation is not prescribed by AUTOSAR

Description of Software Component by AUTOSAR:

·         The operations and data elements that the software component provides and requires.

The source code component implementation is independent from:

·         Number of times a software components is instantiated in a system.

·         Location of other components with which it interacts.

To fulfill goal of transferability, AUTOSAR software components are implemented independent of underlying hardware. VFB provides such virtual interconnection between different components without

The AUTOSAR Runtime Environment has the responsibility to provide a uniform environment to AUTOSAR Software Components to make the implementation of the software components independent from communication mechanisms and channels.

The RTE is responsible for the lifecycle management of AUTOSAR Software Components. It has to invoke startup and shutdown functions of the software component. It acts as layer of separation between ASW (applicationsoftware) and BSW (base software). The BSW modules are free to call any API functions or other modules directly. Whereas ASW components can only communicate via ports.

The RTE is furthermore responsible for ensuring the consistency of data during communication, that
is, to ensure that data are not changed while being received or sent.

The result is an ASW component-specific header file that can be included by the corresponding
source code file. In this header file, all RTE API functions that may be used by the ASW componentare declared. It also declares the necessary data types and structures needed by the ASWcomponent.

In this phase the concrete code generation for a given ECU is performed. Input
for this phase is the ECU configuration description, which includes especially the mapping of runnableentities to OS tasks or the communication matrix. Together with the ASW component header filescreated during the contract phase and all necessary BSW code, the generated code can then becompiled to an executable file for the given ECU.

This layer interfaces driver of Microcontroller abstraction layer. Also contains drivers of external devices. It offers API for access to peripherals and devices regardless of their location and their connection to uC.

The highest layer of BSW which provides services to application software such as:

The implementation is uC and ECU hardware independent.

This serves as special functional and timing requirements for handling complex sensors and actuators. The CDD implements complex sensor evaluation and actuator control with direct access to uC specific interrupts and peripherals.

The conformance classes are basically used to ease migration form non AUTOSAR to AUTOSAR platform. Since taking all the modules at once will be a huge effort, the classes are divided into three sections as ICC1, ICC2, and ICC3.

The client initiates the communication, requesting that the server performs a service, transferring a parameter set if necessary. The server waits for incoming communicationrequests from a client, performs the requested service, and dispatches a response to theclient’s request. The direction of initiation is used to categorize whether an AUTOSARSoftware Component is a client or a server. A single component can be both a client and aserver, depending on the software realization. The client can be blocked (synchronouscommunication) or non-blocked (asynchronous communication), respectively, after theservice request is initiated until the response of the server is received. The image gives an example how client-server communication for a composition of three software components and two connections is modeled in the VFB view.