Continue to Site
In one of the projects of Barrett, he along with his friend have tried to build a balancing robot that runs on the principles of the popular Segway two-wheeled transportation system. But unfortunately, the project is at infant stage because of the unavailability of the CAD files for the frame and the absence of code documentation. 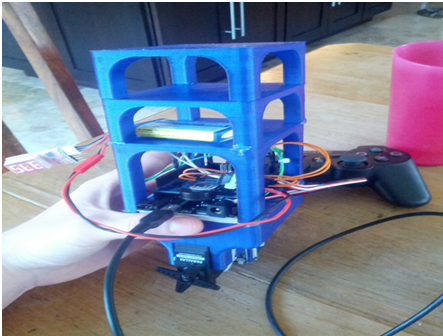 Frame with servos and electronics (Image Courtesy: barrettsprojects)
The main purpose of the project was to understand the Kalman filter. The entire system either accelerates or decelerates the wheels, to keep the system erect with the help of 3D printed frame and some components I had lying around. The code includes a PID controller and a Kalman filter, where the former was used from the Arduino PID Library and the latter was inspired by this project.
The hardware used for this project includes Arduino Mega 2560, USB host shield for communication with a PS3 controller, Bluetooth dongle, 2 x Parallax continuous servos, Bluetooth transceiver, Lipo battery low voltage alarm, Potentiometers for tuning PID controller, a tall frame, and wheels of your choice and an assortment of zip-ties.
The dual Use Gyro and Accelerometer Sensor Board is also used for this project that consists of an ADXL345 3-axis accelerometer and an ADW2207 analog gyroscope. Both of them can be bought independently. Any analog gyroscope can be replaced for the ADW2207 but then a new code is to be written for using a different accelerometer.
The zip file of the code containing the Arduino and Processing code can be found here. For video and other information, visit the following website.
Filed Under: Reviews