BMW is all set to launch its HoloActive touch system at the CES show that is to be held in Las Vegas next month. It is a virtual touchscreen that will be seen right next to the steering wheel. It will act as an interface between driver and the vehicle. As BMW likes to quote it, “it acts like a virtual touchscreen; its free-floating display is operated using finger gestures and confirms the commands with what the driver perceives as tactile feedback.” Its free-floating marks make it one of the most distinguished innovations of the century. As BMW blog writer Horatiu Boeriu puts it, “For the first time, the functions can be controlled without any physical contact with materials.”.

BMW makes its system stand out of the other competent systems through reflections that lead to generation of illusion of a floating display rather than being projected over windshield. It is embedded with a system of cameras that keep a close watch on drivers’ gestures, hands, fingers, and other parts of body. This helps the system in acknowledging  when exactly the driver touched the virtual control pads. Whenever they do the system generates a pulse and takes appropriate action. 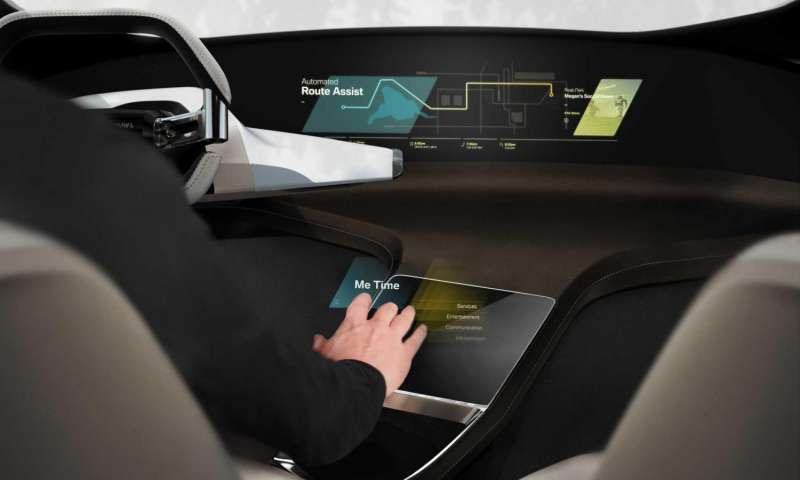 The BMW release explains it as, “the image of a full-colour display is generated by clever use of reflections but now in free-floating form within the interior rather than through projection onto the windscreen. It displays flexibly configurable control pads and is visible to the driver next to the steering wheel at the height of the centre console. A camera detects the driver’s hand movements within this ergonomically user-friendly area, and registers the position of their fingertips, in particular. As soon as a fingertip makes contact with one of these virtual control surfaces, a pulse is emitted and the relevant function is activated.” For now, the touch system works only with the services that are offered by BMW, it is technically a part of BMW’s connected cloud system.