In a previous tutorial – Arithmetic Circuits, digital circuits for performing arithmetic operations were designed. Like Arithmetic operations, comparison of numbers is also an important mathematical operation. From computing perspective, the comparison of numbers plays vital role in decision making and logical operations.  In digital systems, the numbers are in the form of binary numbers. The comparison of two numbers determines whether one number is greater than, equal, or less than the other number. A digital comparator is widely used in combinational systems and is specially designed to compare the relative magnitudes of binary numbers.

There are also discrete ICs available for comparison of binary numbers. In this project SN7485 IC is used which is a 4-bit magnitude comparator. The two 4-bit numbers are input to the IC through a DC supply via 8 position DIP switch. The result of the comparison is verified by connecting LEDs at the output pins of the IC. 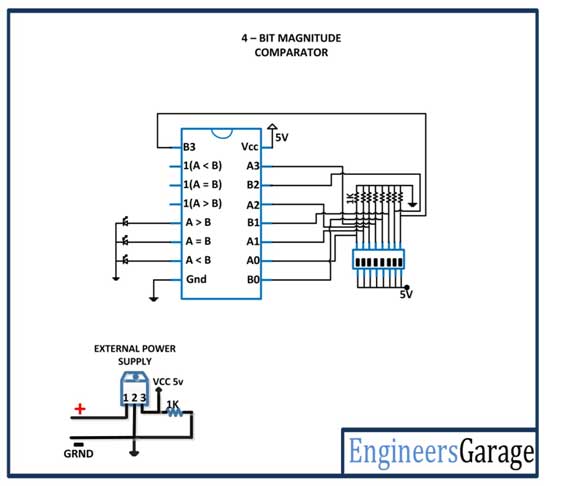 For comparison of 4-bit numbers, SN7485 IC is used in this project. The IC is a 4-bit magnitude comparator which can be used for comparison of straight binary numbers and BCD coded numbers. The 16-pin IC has the following pin configuration – 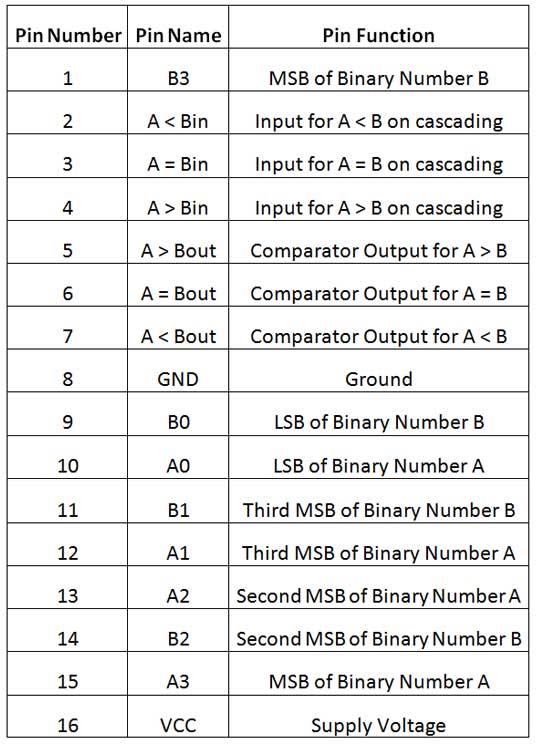 The IC has the following pin diagram – 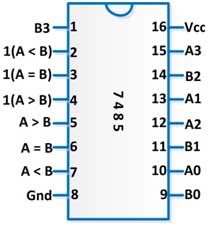 It can be noted that the SN7485 have additional input terminals that allow more individual comparators to be “cascaded” together to compare words larger than 4-bits with magnitude comparators of “n”-bits being produced. These cascading inputs are connected directly to the corresponding outputs of the previous comparator to compare 8, 16 or even 32-bit words. In this project, simply two 4-bit numbers are compared, so there is no need f cascading.

The input binary numbers are passed to the IC to the respective input pins via an 8-position DIP switch. The result of comparison is verified by connecting LEDs at output pins 5, 6 and 7 of the IC. 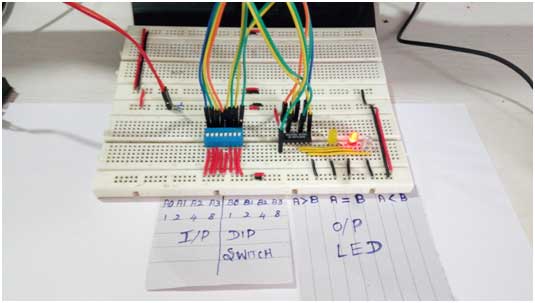 These type of digital comparators are used in the address decoding circuitry in computers and microprocessor based devices to select a specific input/output device for the storage of data.

They are also used in control applications in which the binary numbers representing physical variables such as temperature, position, etc. are compared with a reference value. Then the outputs from the comparator are used to drive the actuators so as to make the physical variables closest to the set or reference value. Like the digital comparators are used in applications like process controllers and servo motor control.

The output of the circuit can be tested by passing different 4-bit binary numbers to the input pins of the 7485 IC. On comparison of the two binary numbers, either of three output pins will be HIGH and the respective LED will start glowing. The following observations were made on working with the 7485 IC

Fig. 6: Table listing output of 7485 IC based 4-Bit Magnitude Comparator
In the next tutorial, learn about more combinational circuits like multiplexers and encoders.