Continue to Site
In this tutorial i am going to build a simple two digit calculator with 8051(89c51,89c52) microcontroller. Calculator takes two single digits and an operator as input and produces output. Input is taken by 4×4 numeric keypad and output is displayed on 16×2 character lcd. Diy calculator can perform four operations addition, subtraction, negation & division. 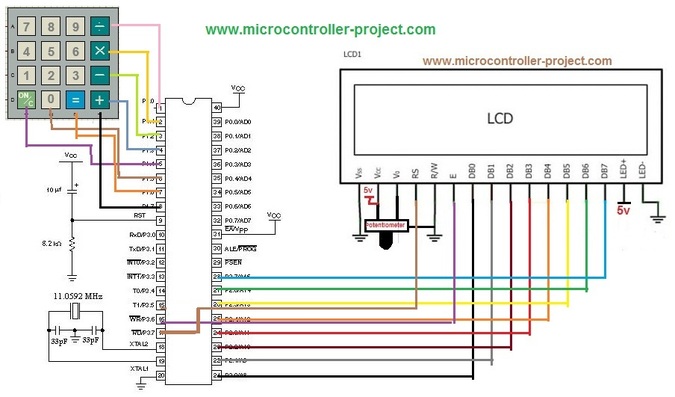 Starting from the beginning, the first line of the code. Don’t forget to include reg51.h header file to your every project that contains an 8051(89c51,89c52) microcontroller in it. This header file is very important. Keil compiler checks this header file in your code first. If it is present compiler compiles your code, absence of this header file will lead to an error. Next some functions declarations.

I put the main function body in continuous while loop, in order to run the calculator for ever.  lcdinit() function is initializing the lcd chipset driver with some necessary lcd commands (don’t understand just click the link and you will have a good tutorial on it Initializing  lcd). Than in while loop I am printing the string on lcd ENTER 1 NO =. Enter the number of your desire from keypad. key=scan_key() statement is scanning key that you presses on the keypad. scan_key() function returns a character that you pressed on keypad. k2=get_num(key) is converting the returned key from scan_key() function in a digit.

Scan_key() is reading the key as character. To perform arithmetic operation on the key we have to convert it in number. get_num(key) is doing this work for us. Then lcddata() function is printing the character on lcd and lcdcmd (0x01) command clears all the contents of lcd.

Than the next string prints on lcd saying operator = . You have to enter the operator and all the previous steps are repeated. Than the next string appears saying Enter 2 no= Just enter the no. Now you see a switch statement it is making decision if the operator you entered is + it will go for disp_num(K1+k2) function by adding the two number you just entered. For – operator it will go for negation and for other operators it will for them. Sending commands and  data to lcd is very import function its brief detail is available at Lcd data & Command function. Than delay function to put some delay in the process it is very important . One can understand it when running the embedded code in hardware equipment’s. scan_key() function is explained on the following link 4×4 keypad programming.

The disp_num() function is displaying our calculated number on 16×2 lcd.

Now how it is working?

First i am converting my float num in integer by numb=(int)num. Then I am checking if num is less than 0 or if  it is negative. If number is negative i multiplied it with -1 and make it positive. Then sending – sign on lcd because the value calculated is in – form. Than if value is grater than 10 i am finding ten digit by dividing numb/10 now if tendigit not equal to 0 than display it on lcd. lcddata(tenthdigit+0x30) you people are thinking what does it mean. Actually when I divide numb/10 the value returned to TEnthdigit is in ASCII form because TenthDigit is a character variable so to make a ASCII value to character just add 0x30 or 48 in it because these are the values from where the digits starts. Than for unit digit numb-TenthDigit*10 it will give us the unit digit in ASCII form to make it value add 0x30 in it. If you don’t add 0x30(hexadecimal) or 48(decimal) to it Then the lcd will show some special characters .The starting characters of ASCII Table. Than decimal value is calculated and it is also printed on lcd using the same method. Just copy the code made the hardware circuit burn the code in 8051(89c51,89c52) microcontroller and check your creation.  ​

Some more projects on making two digit calculator with microcontrollers are below. You can find free source codes and circuit diagram of the projects in the tutorials. Click the below buttons to visit the tutorials.

Download the project files, code(C++, Hex) compiled in keil U-vision 4. Give us your feed back on the project. If you have any queries write them in the comments section below
Watch The Project Video Here……