Continue to Site
The main performance parameters of a CCD device are its speed, sensitivity, resolution and cost. However, the choice of architecture is dependent on the application of the devices. While astronomy requires that maximum light being captured, price seldom being a constraint, full frame read-out architecture CCD devices are utilized. But in case of the point and shoot photography cameras where shutter speed and cost counts the most, interline architecture is the most popular.
CCD arrays are only sensitive to intensity and not color. Thus, in order to obtain a color image, filters are used. Colored images may be obtained by using either the Bayer Pattern or 3CCD and a dichroic beam splitter prism.

Bayer Pattern is a special color grid which is placed over the imaging array. Human eyes being most sensitive to green color, two out of four grids have a green filter. The remaining have blue and red, comprising the RGB color pattern. A digital signal processor interpolates the two missing colors from the values of the neighboring pixels. Bayer pattern though simple and cheap, throws information away compromising on image resolution. Also, when used in places with abrupt changes in light intensity Bayer pattern creates artifacts. Some cameras may also use different color patterns for color generation too. Resolution can be improved in specific applications by Microscanning Technology.
A dichroic beam splitter prism splits the image into red, green and blue components which can then be incident separately on three-CCD devices. This offers higher quantum efficiency over Bayer Mask as most of the light is captured by the sensors and not absorbed by intermediate layers of the Mask. Such devices have been used in professional video camcorders.
A CCD Device despite of all the good features it has to offer does have a few drawbacks too. Coupling of the charges along a row of many pixels results in the loss of considerable amount of charge resulting in fading. Improper shutter control, or over bright conditions leading to too many photons reaching the CCD element results in the leakage of charge to the neighboring pixel, which causes blooming. 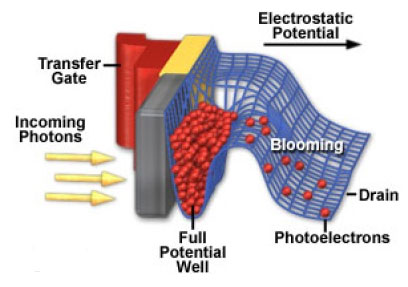 Further, if photons strike sensors while charge is being transferred due to improper clocking, data loss in the form of smears can happen. The sensitivity of a CCD device is often a function of the temperature of operation. As the temperature increases, the leakage dark current also increases, thereby reducing sensitivity. Noise is inherent to every electronics equipment and in case of devices based on CCD, the SNR degradation may take place due to photon noise, dark noise or read noise or the combination of them. However, intensive research work in this field has yielded positive results and   the development of many improved variants. Devices like Electron Multiplying CCD (EMCCDs) which incorporate on-chip multiplication gain have helped achieve single photon detection sensitivities without compromising on resolution or efficiency of CCD structure while reducing costs. These features are otherwise typical of the costly Electron-Bombarded CCDs which utilizes an image intensifier with a CCD device.
Filed Under: Articles