This project is shared by Mr.Shankhalpara Bhargav B. from Rajkot, India. 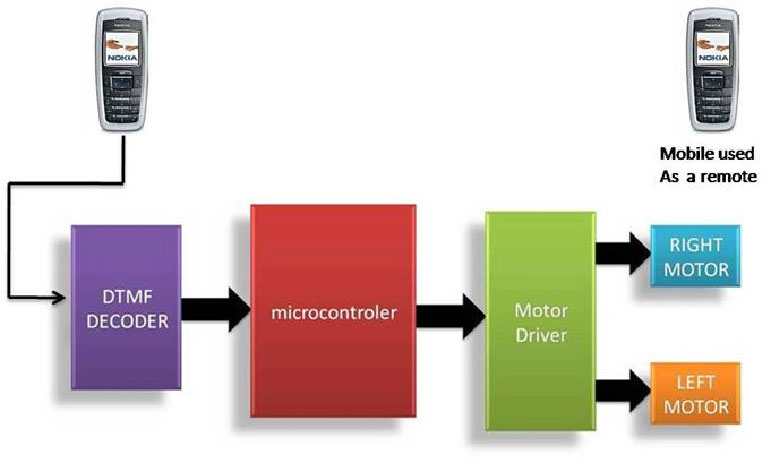 PROJECT OVERVIEW
In this project “Cell Phone Operated Land Rover“, the robot is controlled by a mobile phone that makes a call to the mobile phone attached to the robot. In the course of a call, if any button is pressed, a tone corresponding to the button pressed is heard at the other end of the call. This tone is called DTMF (dual-tone-multiple-frequency).The robot perceives this DTMF tone with the help of the phone stacked in the robot. The received tone is processed by the (ATmega16) microcontroller with then help of DTMF decoderMT887o. The decoder decodes the DTMF tone into its equivalent binary digit and this binary number is sent to the microcontroller. The microcontroller is programmed to take a decision for any given input and outputs its decision to motor drivers in order to drive the motors in forward direction or backward direction or turn. The mobile phone that makes a call to mobile phone stacked in the robot act as a remote.so this robotic project es not require the construction of receiver and transmitter units.
CIRCUIT DISCRIPTION
The important components of this mobile controlled robot are a DTMF decoder, microcontroller and motor driver.An MT8870 series DTMF decoder is used here. All types of the MT8870 series use digitalcounting techniques to detect and decode all the 16 DTMF tone pairs into a 4-bit code output.The built-in dial tone rejection circuit eleminates the need of pre-filtering. when the input signalgiven at pin 2(IN-) in single-ended input configuration is recognised to be effective, the correct4-bit decode signal of the DTMF tone is transferred to (pin11) through (pin14) outputs.The pin11 to pin14 of DTMF decoder are connected to the pins of microcontroller (pa0 to pa3).The ATmega16 is a low power, 8-bit CMOS microcontroller based on the AVR enhanced RISCarchitecture. it provides the following features: 16kb of in-system programmable flash programmemory with read-while-write capabilities, 512 bytes of eeprom, 1kb SRAM, 32(IO) lines.outputs from port pins PD0 through PD3 and PD7 of the microcontroller are fed to the inputsIN1 through IN4 and enable pins (EN1 and EN2) of motor driver L293D IC, respectivily to drivetwo geared dc motors. Switch S1 is used for manual reset. The microcontroller output is not sufficientto drive the dc motors, so Current drivers are required for motor rotation.The L293D is a quad, high-current, half-h driver designed to provide bidirectional drive currents of upto600mA at voltages from 4.5V to 36V. It makes it easier to drive the dc motors. The L293D consists of four drivers. Pins IN1 through IN4 and OUT1 through OUT4 are the input and output pins respectively, of driver 1 through driver 4. Drivers 1 and 2, and driver 3 and 4 are enabled by enable pin 1(EN1) and pin 9 (EN2), respectively. When enable input EN1 (pin1) is high, drivers 1 and 2 are enabled and the outputscorresponding to their inputs are active. Similarly, enable input EN2 (pin9) enables drivers 3

In order to control the robot, you need to make a call to the cell phone attached to the robot (through headphone) from any phone, which sends DTMF tunes on pressing the numeric buttons. The cell phone in the robotis kept in ‘auto answer’ mode.( if the mobile does not have the auto answering facility ,receive the call by ‘OK’key on the rover connected mobile and then made it in hands-free mode.) so after a ring, the cellphone accepts the call.Now you may press any button on your mobile to perform actions as listed in the table . The DTMF tones thusproduced are received by the cellphone in the robot. These tones are fed to the circuit by headset of the cellphone.
The MT8870 decodes the received tone and sends the equivalent binary number to the microcontroller. Accordingto the program in the microcontroller, the robot starts moving.When you press key ‘2’ (binary equivalent 00000010) on your mobile phone, the microcontroller outputs ‘10001001’binary equivalent. port pins PD0, PD3 and PD7 are high. The high output at PD7 of the microcontroller drives themotor driver (L293D). port pins PD0 and PD3 drive motors M1 and M2 in forward direction( as per table ).Similarly, motors M1 and M2 move for left turn, right turn, backward motion and stop condition as per (table ). 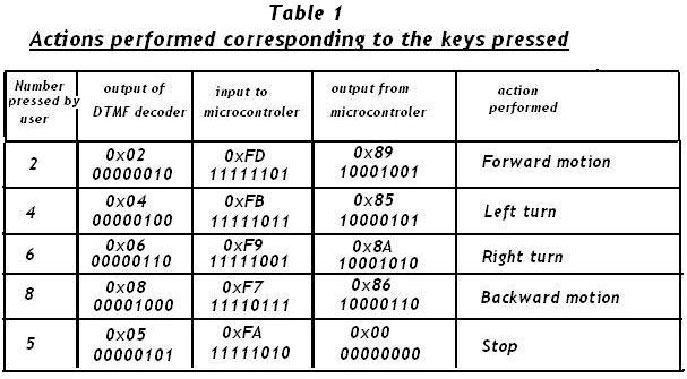 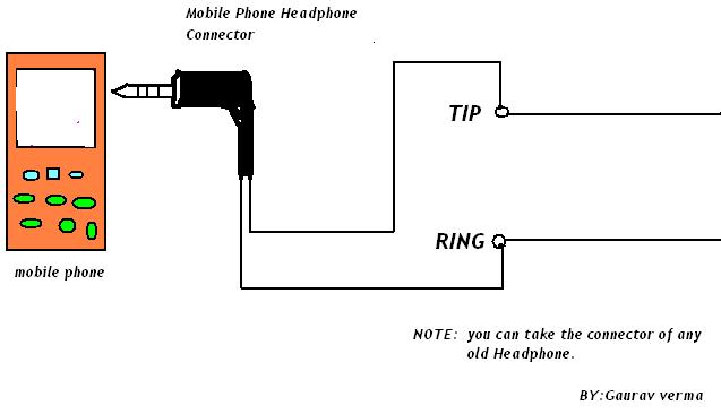 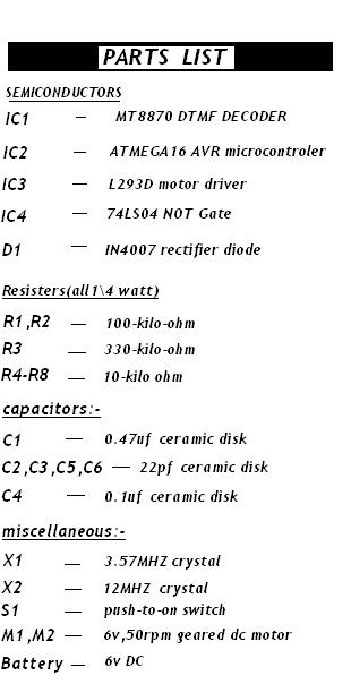 1. 8870 DTMF DECODER IC
The M-8870 is a full DTMF Receiver that integrates both bandsplit filter and decoder functions into a single18-pin DIP or SOIC package. Manufactured using CMOS process technology, the M-8870 offers low power consumption (35 mW max) and precise data handling. Its filter section uses switched capacitor technology for both the high and low group filters and for dial tone rejection. Its decoder uses digital counting techniques to detect and decode all 16 DTMF tone pairs into a 4-bit code. External component count is minimized by provision of an on-chip differential input amplifier, clock generator, and latched tri-state interface bus. Minimal external components required include a low-cost 3.579545 MHz color burst crystal, a timing resistor, and a timing capacitor. The M-8870-02 provides a “power-down” option which, when enabled, drops consumption to less than 0.5 mW. The M-8870-02 can also inhibit the decoding of fourth column digits 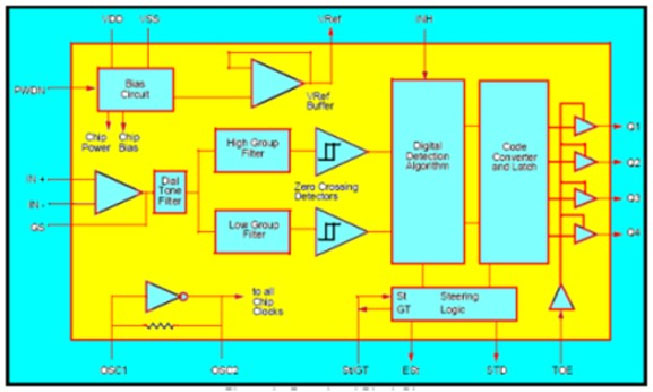 Functional Description
M-8870 operating functions include a band split filter that separates the high and low tones of the received pair, and a digital decoder that verifies both the frequency and duration of the received tones before passing the resulting 4-bit code to the output bus.
Filter
The low and high group tones are separated by applying the dual-tone signal to the inputs of two 6th order switched capacitor bandpass filters with bandwidths
That corresponds to the bands enclosing the low and high group tones. The filter also incorporates notches at 350 and 440 Hz, providing excellent dial tone rejection. Each filter output is followed by a single-order switched capacitor section that smooths the signals prior to limiting. Signal limiting is performed by highgain comparators provided with hysteresis to prevent detection of unwanted low-level signals and noise.The comparator outputs provide full-rail logic swings at the frequencies of the incoming tones.
Decoder
The M-8870 decoder uses a digital counting techniqueto determine the frequencies of the limited tones and to verify that they correspond to standard DTMF frequencies. A complex averaging algorithm is used to protect against tone simulation by extraneous signals (such as voice) while tolerating small frequency variations. The algorithm ensures an optimum combination of immunity to talk off and tolerance to interfering signals (Third tones) and noise. When the detector recognizesthe simultaneous presence of two valid tones (known as signal condition), it raises the Early Steering flag (Est.). Any subsequent loss of signal condition will cause Est. to fall. 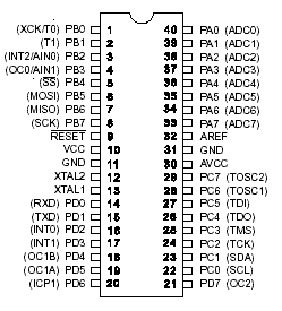 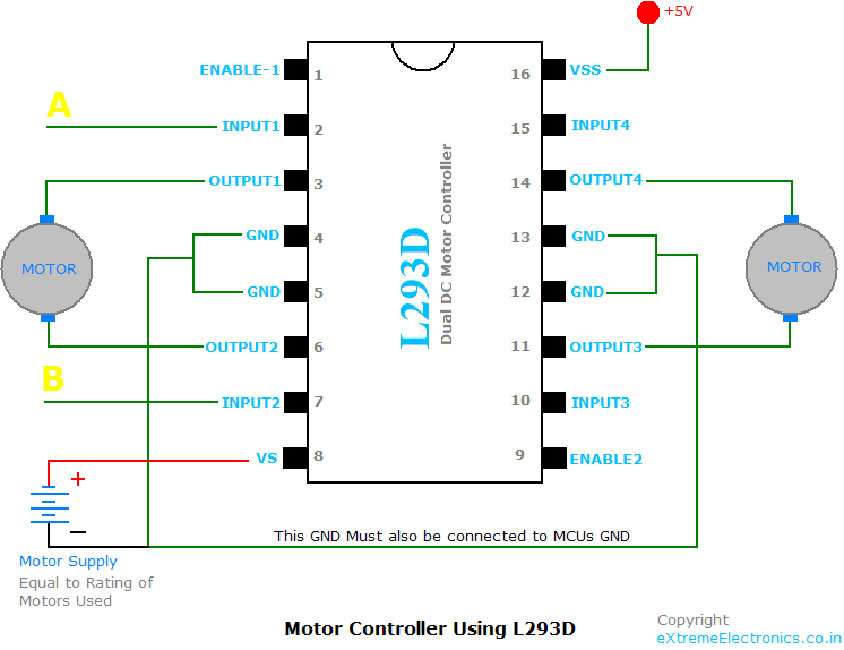 DESCRIPTION
The Device is a monolithic integrated high voltage, high current four channel driver designed to accept standard DTL or TTL logic levels and drive inductive loads (such as relays solenoids, DC and stepping motors) and switching power transistors.
To simplify use as two bridges each pair of channels is equipped with an enable input. A separate supply input is provided for the logic, allowing operation at a lower voltage and internal clamp diodes are included. This device is suitable for use in switching application at frequencies up to 5 kHz. The L293D is assembled in a 16 lead plastic Package which has 4 center pins connected together and used for heat sinking The L293DD is assembled in a 20 lead surface Mount which has 8 center pins connected together and used for heat sinking.
ADVANTAGES
·                     This is wireless controller robot hence the limitation of wired robots is completely overcome by using latest technology of mobile phones.
·                     In this project we have used RF circtury hance the limitation of a controlled range is no more a constrain of this model.
·                     Limitless area coverage is the main advantage of this land rover
DISADVANTAGE
·                     This land rover has only one disadvantage that is it can be operated in area where mobile network is available and if mobile network is not available it can not be operated.
APPLICATION
·         This land rover can carry any thing mounted on top it.
·         This can be fitted in an attractive form of a toy robo.
·         It can also be used to make mobile bomb by making some modification.
·         If we use the switching IC instead of the driver ic we can turn on and off any appliances connected to this robot