One method around such high-energy costs has been considered to be solar-powered thermal desalination that can assist produce clean water in developing countries and remote areas. But, the solar approach to water desalination is just constrained in the volume of fresh water it can release and is further hampered by the requirement for optical concentrators and for thermal insulation, both of which have constrained the large-scale utilization of this approach.

Now an international research group comprised of researchers from Nanjing University and Stanford University in China has introduced a solar absorber substance made from graphene oxide that allows a solar approach to desalinating water without the requirement for thermal insulation and solar concentrators. The result could be less expensive, portable water desalination ideally suitable for remote areas and developing nations.

“It is the foremost time that big solar steam efficacy under single sun has been accomplished without any exterior thermal insulation,” says Jia Zhu, a scientists at Nanjing University. “In addition to this, it is highly foldable and less priced, feasible for big-scale deployment.”

Conventional solar thermal desalination moved from an almost paradoxical procedure. You might want to have a solar absorber in direct link with the water to make sure the most effective transfer of energy between the two. But, in practice all that unheated water next to the water in link with the absorber results in a big amount of thermal loss, needing a lot of thermal insulation. 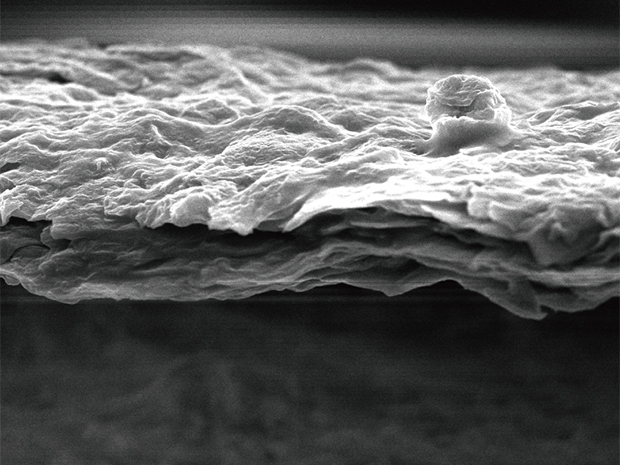 The water revolves around this 2D channel through capillary action and heats by the absorber without the remaining of the water dissipating the heat. The core to getting this all to work is the graphene oxide utilized as the absorber. Without the unique collection of graphene oxide properties, even the ingenious 2D channel for revolving the water would not perform the trick.

“Foremost it is an excellent solar absorber,” says Zhu. It has less thermal conductivity in the direction perpendicular to the substance’s plane. It has pores that function as channels for water vapour, it can be folded and it is less priced,” he says