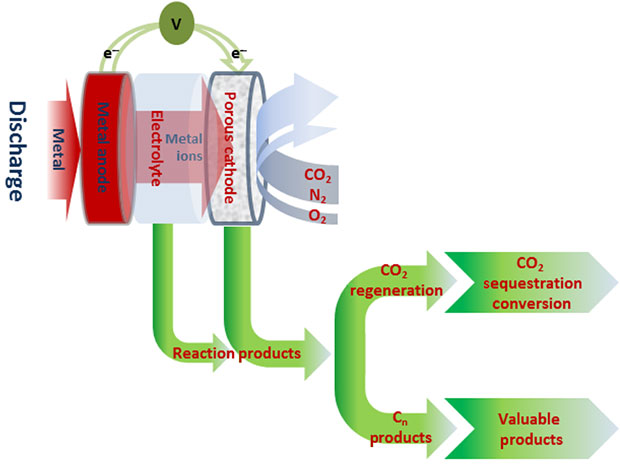 With use of oxygen and aluminium, it is now possible to transform carbon dioxide into valuable chemicals with use of novel technology. It is also possible to create substantial volumes of electronic energy, say the researchers.

The large-scale adoption of carbon capture, sequestration and utilization technologies is presently limited in part by how much level of energy it can capture carbon. In addition to this, procedures to make the most of carbon dioxide once it gets involved by transforming it into utilizing fuels and chemicals have proven tricky to develop.

But currently, chemical engineer Lynden Archer and his team at Cornell University examined whether the electrochemical cells could both gather carbon dioxide and release power. Such electrochemical cells that were hypothesized would utilize a metal as the anode and linked streams of oxygen and carbon dioxide as the active ingredients of the cathode. The reactions occurring between the electro-chemicals cathode and anode would sequester the carbon dioxide gas into compounds rich in carbon while also generating electricity.

Archer and his associate Wajdi Al Sadat illustrated their findings in one of the editions of a famous magazine. Past studies utilized sodium, magnesium and lithium as anodes in such electrochemical cells. “Such converted carbon dioxide into carbonates that are not pretty much useful,” says Archer. “It then happened to us to utilize aluminium, which is the third biggest element in the crust of Earth.” Aluminium’s easy availability makes it cost-effective and it is also the least chemically reactive than sodium and lithium, which makes it secured to work with it, Archer.

In the novel device, the anode incorporated aluminium foil, the cathode comprises of a porous and electrically powerful substance like stainless steel mesh that enables carbon dioxide and oxygen to move through it, and the electrolyte bridging the gap between cathode and anode is a substance through which molecules get diffused.

In studies, the electrochemical cell would result in as much as huge as 13 ampere hours for each gram of carbon atom it gathered, without the requirement for high temperatures of catalyst. Moreover, it transformed carbon dioxide into aluminium oxalate that in turn is conveniently transformed into oxalic acid, which is a chemical extensively utilized in industry. “It is a highly potential product that is a nice instigating material for plastics and so forth,” says Archer. In the theory, supplementing additional compounds to the cathode may assist carbon dioxide to other better chemicals, adds Archer.

Also, it is noted by Archer that the electrolyte present in this group of electrochemical cell does not perform better if bring in contact to water. It is big problem because the carbon dioxide emissions that are treated by this device, like as those obtained from power plants or factories might be incorporated with large volumes of moisture. However, it is also possible to identify an electrolyte that is comparatively sensitive to water, and hence, can be used to serve numerous applications that requires the presence of such feature,” says Archer.