The first working point contact transistor developed by John Bardeen, Walter Brattain and William Shockley at Bell laboratories in 1947 initiated the rapid growth of the information technology industry. In 1958, J Kilby invented the first integrated circuit flip flop at Texas and soon after this; Frank Wanlass at Fairchild described the first CMOS logic gate (nMOS and pMOS) in 1963.

The most common description of the evolution of CMOS technology is known as Moore’s law. In 1963 Gordon Moore predicted that as a result of continuous miniaturization, transistor count would double every 18 months. The observation made by Gordon Moore was that the number of components on the most complex integrated circuit chip would double each year for the next 10 years. This doubling was based on a 50 – 60-component chip produced at that point of time compared with those produced in preceding years. Looks surprising, but his prediction has turned true and is being treated as a law.  The speed of transistors increases and their cost decreases as their size is reduced. The transistors manufactured today are 20 times faster and occupy less than 1% of the area of those built 20-30 years ago.  In 1971, Intel 4004 had transistors with minimum dimension of 10um and in 2003; Pentium 4 had transistors with minimum dimension of 130 nm. Having crossed 90nm, 65nm technological nodes, 32 nm and 22nm technology is in the pipeline. 53% compound annual growth rate is achieved over 45 years. No other technology has grown so fast so long. Transistors have become smaller, faster, consume less power, and are cheaper to manufacture.  It seems intuitively obvious that scaling cannot go on forever because transistors cannot be smaller than atoms.

The first integrated circuits hitting the markets in the seventies had a few 100 transistors integrated in bipolar technology.  Even though the principles were well known, MOS arrived in the markets several years later. One of the reasons behind this was the inherent instability of the MOS transistors due to the presence of minute amounts of alkali elements in the gate dielectric. This caused the threshold voltage of the transistor to shift during the operation.

However, soon the problems of high power consumption by bipolar circuits became dominant. Even in the case of all transistors being ‘OFF’, the sum of the leakage current in bipolar transistors is fairly large. To provide a solution for the problem of power consumption, MOS technology eventually made its way. Dimensions of MOS devices can be scaled down more easily than other transistor types.

In principle, MOS is better in terms of power consumption. MOS devices work with only switching voltages; current per se is not needed for the operation. MOS circuits do have lower power consumption; but they are also slower than their bipolar colleagues. Initially, NMOS got wider acceptance but with the increase in integration density, power consumption again became a problem. Afterwards, in eighties, CMOS processes were widely adopted. Present day chips would not exist if the CMOS technique would not have been implemented around the late eighties.

Silicon IC technologies can be primarily classified under three types:

Bipolar transistors have npn or pnp silicon structure. In these transistors, small current into very thin base layer controls large currents between emitter and collector. Base currents limit integration density of bipolar devices.

MOS is further classified under PMOS (P-type MOS), NMOS (N-type MOS) and CMOS (Complementary MOS). MOS derives its name from the basic physical structure of these devices; MOS devices comprise of a semiconductor, oxide and a metal gate. Nowadays, polySi is more widely used as gate. Voltage applied to the gate controls the current between source and drain. Since they consume very low power, MOS allows very high integration.

BiCMOS has made it possible to combine CMOS transistors and bipolar devices in a single process at a reasonable cost to achieve the high-density integration of MOS logic with the current-driving capabilities of bipolar transistors.

Some other variants of FETs have also come up, viz., Si-TFT, polySi-TFT, MESFET, etc. These are used for different applications.

Before exploring CMOS let’s look into NMOS and PMOS.

Physical structure of NMOS device is shown below 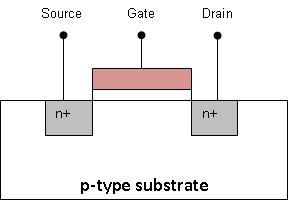 Operation of the device is listed below

¨ No current flows, transistor is OFF

¨ Channel under gate gets “inverted” to n-type

¨ Now current can flow through n-type silicon from source through channel to drain, transistor is ON

NMOS operation is depicted pictorially in the following figure.

PMOS stands for transistors where positively charged carriers flow, i.e. holes are the current carriers. This implies that source and drain must be p-doped areas in an n-doped substrate; the current flow begins as soon as inversion sets in, i.e. the n-type Si between source and drain is inverted to Si with holes as the majority carriers.

Physical structure of PMOS device is shown below 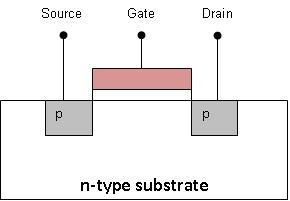 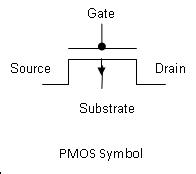 CMOS has characteristics very close to that of an ideal logic family. Ideal logic family should dissipate no power, should have zero propagation delay, controlled rise and fall times, and have good noise immunity.

CMOS takes the merits of both, NMOS and PMOS. CMOS technology uses NMOS and PMOS transistors. The transistors are arranged in a structure formed by two complementary networks, viz. Pull Up Network and Pull Down Network (PDN). Since there is no static current flow; only a small amount of dynamic current exists while switching takes place, CMOS device consume very small amount of power. 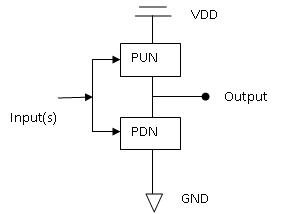 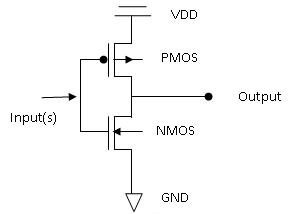 Technology nodes are defined by the feature size; Feature size f = distance between source and drain is set by minimum width of polysilicon. While describing design rules, feature size is normalized. Design rules are expressed in terms of l = f/2, e.g. l = 0.3 mm in 0.6 mm process

Major fabrication steps for a CMOS process are as follows:

(a)    Photolithography to define n-well area

(b)   Ion Implantation to create n-well

It is required to prevent conduction between unrelated transistor sources and drains.

Region between two n+ regions is covered with field oxide and metallization on top of it. This forms a transistor, though with large threshold, and introduces parasitics.

Channel stop implantations are done with the help of 5 process steps.

(a)    Create a stack of Silicon Oxide, Silicon Nitride and positive photoresist layers.

(d)   Removal of PR. Growth of thick oxide layer in areas where Silicon Nitride is not there.

d)     Growth of Gate Oxide to serve as gate dielectric

Native threshold value typically is far from the desired values (VTHN~ 0V and VTHP~ -1 V). Hence thin layer of dopants are implanted to adjust it.

(a)   Deposit PolySi on top of Gate Oxide

(a)   Creation of oxide spacers at edges of PolySi gate.

(b)  Deposition of conductive material through CVD process.

a)     Cover wafer with a thick layer of oxide

a)    Deposit a layer of metal

b)     Photolithography using Via Mask 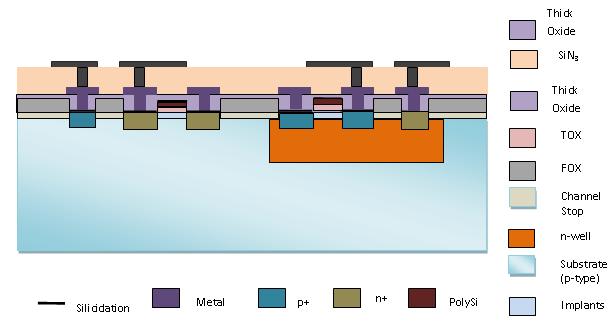 Wafer is covered with a layer of glass to protect the surface against the damages. Finally bond pads are created.

COMPARISION OF THE FEATURES OF CMOS & BJT DEVICES

·         Compared to BJT CMOS devices are low power consumption device. Power is drawn only during switching of states in CMOS.

·         CMOS is more sensitive to electrostatic discharge compared to BJT.

·        MOSFET has higher immunity towards radiation compared to BJT

The CMOS have different input and output switching levels than the TTL logic devices. The output switching levels from CMOS ICs is higher than a TTL IC, which happens to result in a better design and does not have a negative effect. However the difference in input logic switching level does affect the design. The TTL output does not correctly switch a CMOS input. The switching difference between a TTL IC output and a CMOS IC input has to be accounted for. In CMOS the floating input is interpreted as an uncertain and In TTL the floating input is interpreted as a logical low.