Continue to Site
In the previous tutorial, a half wave bridge circuit with IR-2110 gate driver circuit was designed. The working principle of a modified sine wave inverter has been already discussed. Now it’s time to complete the circuit of Modified Sine Wave Inverter. The complete sine wave inverter can be designed using full bridge circuit and a step up transformer. The aim of this project is design an inverter which can output a quasi sine waveform having a frequency of 50 Hz and 220 V peak voltage. So all the building blocks will be combined in this tutorial to make the final circuit of the sine wave inverter.
According to the Indian standards for driving AC loads, the AC supply must be of the 50Hz frequency with the symmetrical AC waveform. The voltage of the AC should be in range from 220 V to 240 V. So the inverter has been designed whose output is symmetrically modified sine wave with 50 Hz frequency. The modified sine wave take a pause (set at zero volts) before changing the polarity (as shown in the image below).

In order to complete the design of modified sine wave inverter, all its building blocks are combined. The inverter has the following building blocks –
DC source – A 12V battery will be used to draw power by the inverter. The power drawn from the battery will only be converted to AC power.
Control Circuitry – This is an intelligent circuitry which will be used to drive a transistor circuit for the generation of modified sine wave. This circuit can itself be built using transistors or can be built using a controller board. It is quite easier to built such control circuit with the help of a microcontroller as it avoids designing a complex transistor circuit for the same purpose. In the designing of this inverter, Arduino UNO will be used for control circuit.
Driver Circuitry – The generation of modified sine wave involves driving a gate driver circuit from the control circuitry. A modified sine wave having lower peak to peak voltage is first generated by the gate driver circuit which is then stepped up to 220 V level. The IR2110 IC is used as gate driver for the MOSFET circuit involved in generation of the modified sine wave.
Switching Mechanism – An inverter supplies power to a load when main supply is cut off. So, the inverter requires a switching mechanism between the gate driver circuit to generate a perfect AC signal and resume supply when the main power is cut.
Step Up transformer – The output from the MOSFET circuit is a modified sine wave having a lower peak to peak voltage. This AC wave needs to be stepped up to 220 V level using a step up transformer.
The Arduino based control circuitry and the IR-2110 based gate driver circuitry have been already discussed in the previous tutorials. In the previous tutorial, half bridge gate driver circuit was designed. The full bridge or H-bridge is just the combination of two half bridge circuits. So, in a full bridge circuit, there are two IR-2110 ICs used and two half bridge circuits are combined together (as shown in the circuit diagram below).

Fig. 4: Circuit Diagram of Full Bridge MOSFET Driver for Modified Sine Wave Inverter
The output from the full bridge circuit is a quasi sine wave having a peak voltage of 12 V. This output waveform is passed to a step up transformer to get 220 V waveform at the inverter output.

While assembling this inverter circuit, following precautions must be taken care –

1. Check the connection of the H-bridge and make sure that all the MOSFETs are connected correctly.
2. Check the input power supply of the controller, IC, and MOSFET. Ensure that the power supply is in the range of all the components.
3. Ensure that the input signal to the driver from the controller is correct. The high side and low side input waveform for a half bridge should not overlap as it turns ON both the low and high side MOSFET simultaneously causing a short circuit. Use an oscilloscope to ensure that no signals are overlapping.
4. Check the bootstrap circuitry and ensure that a proper diode is used for switching. The value of bootstrap capacitor should not be too large or too small.
5. Use capacitors at 5V and 12V supply as it can handle the unwanted voltage spikes and noise. Always use a small value of ceramic capacitor in parallel with electrolyte capacitor to reduce the overall ESR.
6. Always use a gate to source resistance to avoid any external noise at the gate and to discharge the parasitic capacitance of the MOSFET.
Otherwise, the MOSFET can get damaged as this parasitic capacitor will keep on charging and exceed the limit of the gate to source breakdown voltage. A diode (like diode D2 in the circuit diagram) can also be used to perform fast discharging of the MOSFET.
7.Ensure that the ground of controller and the driver IC is same, the driver input and output ground should also be common.
8.The step up transformer output impedance should be low so that less voltage drop occur at the output while connecting the load.
9.Make sure all the filter capacitors should be discharged before working on a DC power supply. For this short the capacitors with a screwdriver wearing insulated gloves. 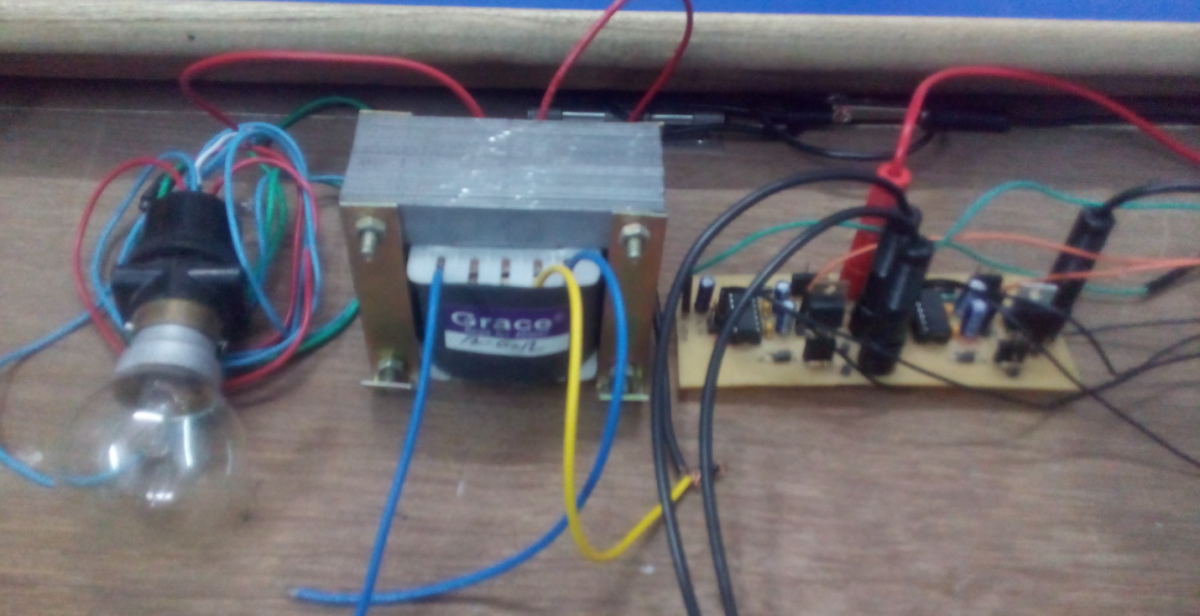 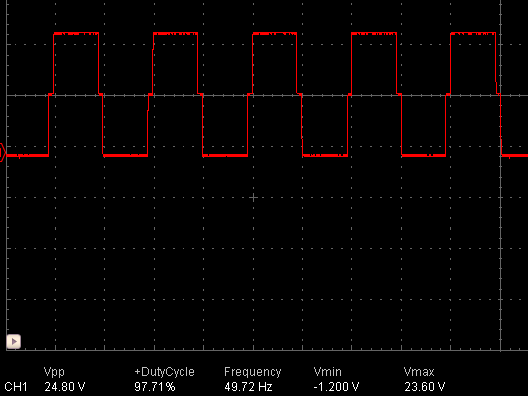 So, practically Input Voltage of the transformer, Vin – 12V 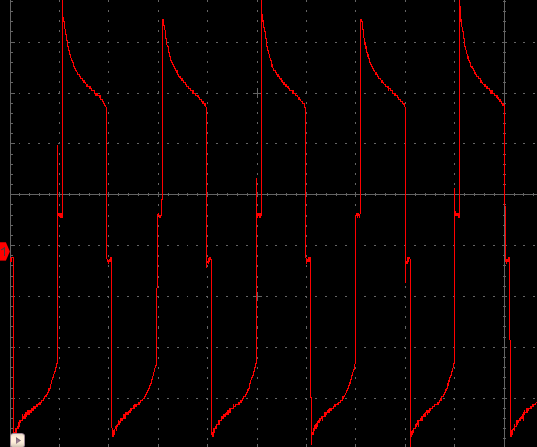 Fig. 8: Graph showing Output waveform of Modified Sine Wave Inverter
The modified sine wave inverter designed in this circuit has only 40 percent efficiency. It has other limitations as well. The inverter requires 420 mA for its operation when no load is connected to the output. So the output current is always 420 mA less than the maximum current that can be supplied by the input source. The maximum output voltage is 155V which is less than the 220V (standard AC supply voltage). This can be improved by increasing the input voltage of primary of transformer upto 18V by using some boosting circuit. The output voltage drops when current demand increases at the output. This is due to the transformer inefficiency, as in transformer there are iron and copper losses. So by using a more efficient transformer, a constant voltage can be maintained. The output waveform of inverter has some voltage spikes. These spikes can be reduced by using a snubber circuit at the input of the transformer. The circuit has large amount of power efficiency loss due to the presence of harmonic frequency. Also, the appliances which rely on the perfect sine wave for input power will not work properly with this circuit.
However, the modified sine wave generated from this circuit is much like true sine wave compared to a square wave. This inverter circuit can be used with most of the household appliances. The same circuit is commonly used in commercial quality inverters. This is an affordable circuit and can be easily implemented in an Uninterruptible Power Supply (UPS) system. 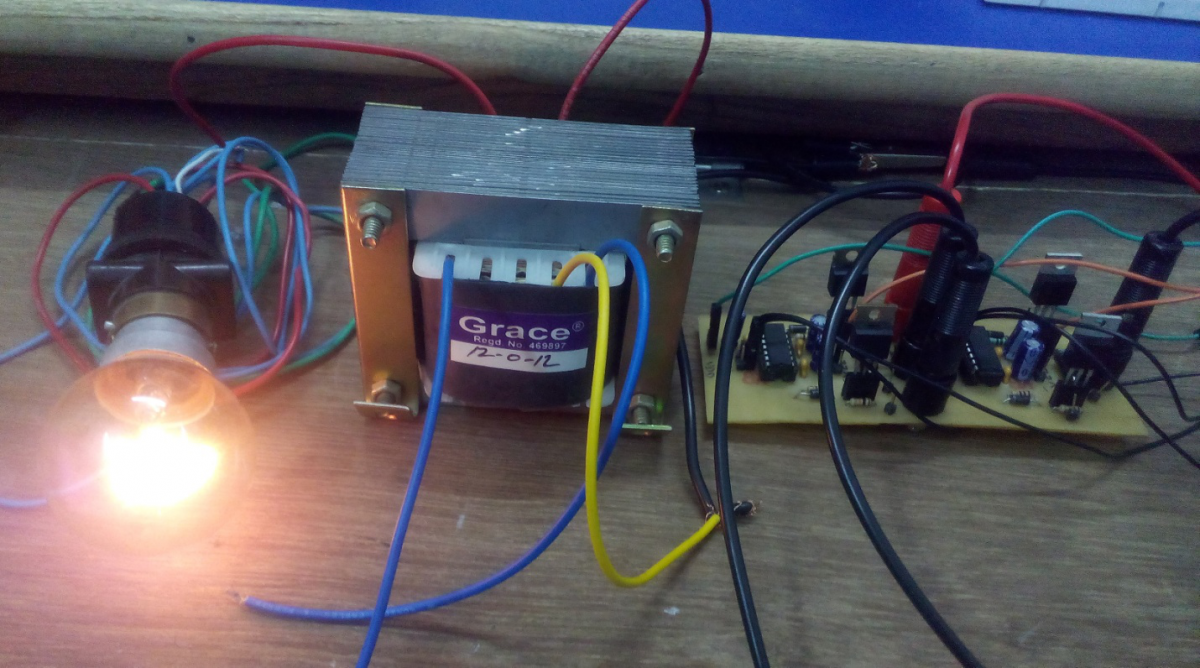 The Arduino sketch for this inverter can be downloaded from the code section. In the next tutorial, UPS topology will be discussed.