Composite Metal Foams (CMFs) can improve the armor strength drastically and also enhance shielding from high-speed kinetic, radiation, and heat impacts. Just like all other foam metals, CMFs are created by infusing gas bubbles into molten metal, it then creates a mixture that settles into a matrix. The resulting materials has the robustness of original metal, but is lighter comparatively/ As compared with other kinds of metal foams, CMFs have 5-6 times better ratio of strength-to-density and has seven times better energy absorption. A professor of mechanical and aerospace engineering department at the North Carolina State University, Afsaneh Rabiei, tested the strength of CMF by applying them as an absorber layer between Kevlar panels and boron carbide ceramic plate. The CMF-based body armor could withstand a 7.62-mm x 63-mm M2 armor-cutting projectile and a 7.62-mm x 51-mm battle rifle. 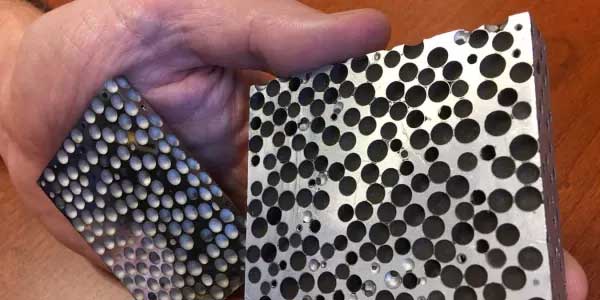 Nevertheless, the preexisting Justice Department – standard type four body armor has relatively more strength, the CMF based armor is also lighter than the other. This benefit will definitely give it an edge for civil and defense application like law-enforcement or military vehicles, oil well drilling platforms, boat hulls, structural shock absorbers, and others. However, CMFs can offer much more strength than regular. The tests performed by Rabiei also demonstrated that CMF is pretty effective in protecting against several types of radiations like neutron, gamma, X-rays, and so forth. CMF also has high tolerance for high temperatures which is almost twice of what regular metals offer. This makes CMF very useful in pretty high-temperature environments as well as in space. For now, the team is working on customizing CMF according to armored vehicles so that they can withstand storage containers for harmful materials, small-arms fire, as well as aero structure applications.