Continue to Site
OLED Monitors
OLED, short for Organic Light Emitting Diode is the latest technology for display devices. As the name suggests there 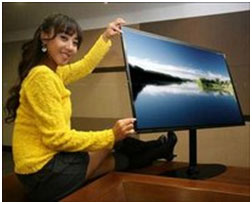 are some organic material (containing carbon, like wood, plastic or polymers.) that is used to convert the electric current into light. Since the LEDs are capable of producing different colored light, they are directly used to produce the correct color and there is no need of a backlight which saves power and space. With fast response time, wide viewing angles, outstanding contrast levels and perfect brightness, OLED displays are surely better than the existing other display technologies.

The heart of the OLED display is a stack of thin organic layers which is sandwiched between two conductors – a transparent anode and a metallic cathode, which in turn are sandwiched between two glass plates known as seal and substrate. The organic layer consists of a hole-injection layer, a hole-transport layer, an emissive layer and an electron-transport layer. When an appropriate voltage is applied, an electric current flows from cathode to anode through the organic layers. The cathode give electrons to the emissive layer of organic molecules while the anode takes equivalent electrons from the conducting layer of organic molecules. At the boundary of emissive and conductive layers, electrons and the holes are gathered. Here electrons are recombined with the holes by releasing energy in the form of photon of light. Hence the organic layer emits the light to produce the display. The color of the light depends on the type of organic molecules while the brightness depends on the amount of the current applied. By maximizing the recombination process in the emissive layer the output light can be improved in OLED devices. Thus the emissive layer is slightly doped with highly fluorescent molecules to enhance the electro-luminescent efficiency and control of color.
Advantage over conventional display technologies:
·         The fabrication process is easy and the display devices are thinner than the conventional display devices.

·         Comparing it with the LCD devices, OLED displays can be viewed from different angles as they are “emissive” devices i.e. they emit light rather than modulating transmitted or reflected light.
·         They do not use backlight.
·         The driving voltage and total power consumption is low as comparing to other display technologies.
·         The material used are eco friendly and do not use lead or other such material.
Filed Under: Articles