Continue to Site
Guilherme Martins, an expert in visual art, mixed media & creative robotics, has found a way to control the Arduino with processing. After many unsuccessful attempts in the quest of finding right library for processing, he has finally got the best that suits for what he needed. The ideology was to get something simple to implement and also easy to understand. 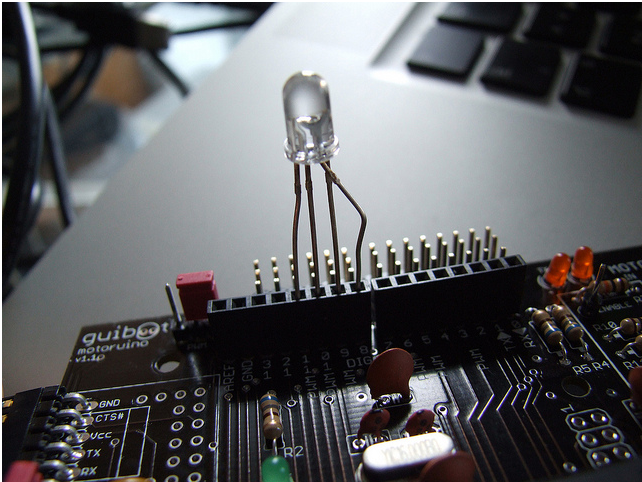 In this post of processing Arduino, an example is being taken, where RGB LED is connected to the Arduino and the processing is done with a simple mixer to fade in and out color channels. LED generally need one resistor in series and in this case, the serial communication part is shown and the resistor part is skipped.
Three digital output pins 9, 10, 11 has been defined in the Arduino side and these defined pins are PWM capable pins. Further, pin 8 has been defined as an OUTPUT, and is digitally written to LOW, to be the GROUND pin. Moreover, on the loop () function, a switch () function is used which detects them after the sync characters ’R’, ‘G’ and ‘B’ are received. These characters are responsible for telling the upcoming value. Further, the function GetFromSerial() is used every time, when a value from the serial port is required to be read.
You can get the complete information along with the video and codes in the following website.
Filed Under: Reviews