Continue to Site
A close glance at a leaf from any of the trees will make you notice the tiny, sleek veins that move through it. The structure of such veins possess is known as quasi-fractal hierarchical networks. These fractals are geometric shapes wherein each component has the same statistical character of the entire. Fractal science is utilized to create everything from the veins of the leaves to snowflakes to the growth of the crystals. 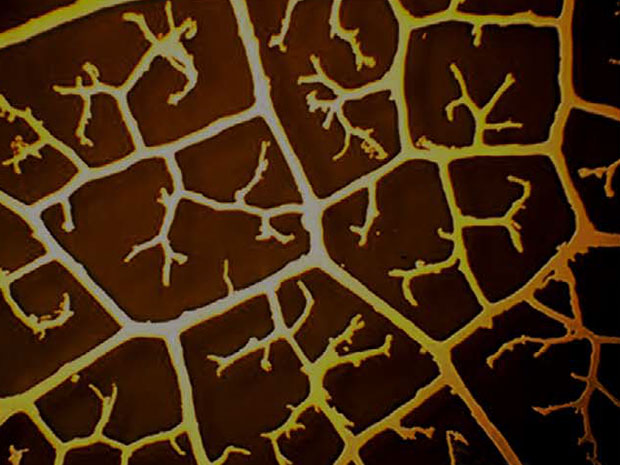 Now an international group of scientists headed by Helmholtx-Zentrum Berlin has copied the quasi-fractal structure of these leaves and utilized it to generate a network of nanowires for touch screen and solar cells displays.
The Indium tin oxide, also known as ITO has been the go-to substance for transparent conductors in solar cells and displays. While the expenditure linked with ITO have been one of the crucial knocks against it, the procedure has been difficult for the multiple nanomaterials induced as substitutes to replace it. Nanomaterials comprising carbon nanotubes, silver nanowires, and graphene have not just been moved by their own related high costs, but their functionality and performance have been somewhat missing as well.
With this novel technique of distribution, nanowires are able to outshine the performance of conventional ITO layers. The vital reason for this becomes much clearer when you will see the leaf and the veins moving across it on your own.
The vein distribution in the leaf is analysed in part by the volume of sunlight and shade the leaf receives. With ITO, the substance is spread out in one regular, uniform layer. But, the way the sunlight comes in contact with the solar cell or the way a finger presses a touch screen display are not similar. Also, this diminished the efficiency of ITO layer.
In the study detailed out, the international research group utilized a quasi-fractal hierarchical network to optimize the scattering of the nanowires on a solar cell as per the three conditions – offering maximum surface coverage, accomplish a uniform current density and have a least overall resistance.
“On the basis of researches carried by us, we were able to develop and introduce an economical transparent metal electrode,” says Michael Giersig, a lecturer at Helmholtz-Zentrum Berlin. He is also a lead author of the research panel. He further added that “We procure such technique by incorporating two silver networks. One of the silver networks is based on an extensive mesh spacing between the main conductors micron-diameter that cater as the ‘bridge’ for electrons shifting electronic current over thee macroscopic distances.”
Further to this broad bridge for moving electrons, the scientists added and confirmed that the distributed networks that cater as local conductors to cover the entire surface between the elements of the large mesh.
Conclusion – “Such smaller networks functions as regional roadways besides the bridges to randomize the strengths and directions of the local currents, and also generate refractions effects to enhance transparency,” says Giersig. Hence, solar cells with the vein-leaf network had an efficacy of 5.91 percent in studies. Those with a basic ITO had approximately 5.37 percent.
Filed Under: News