This tutorial explains how to interface DC motor with Beaglebone black where DC motor acts as an actuator device.  Due to insufficient current, it’s not possible to drive the motor directly from BBB and hence a motor driver IC is needed. Program is written in python script with Adafruit GPIO library.

I have interfaced DC motor and switch with  the Beaglebone black’s GPIO pin. When the script is  executed, it enters in a continuous loop.  One press on the switch will start rotating the motor in a clockwise direction while another press will turn it off. Press ctrl+C  to stop the execution of program form SSH command terminal.

Let’s first prepare the circuit connection. Take a breadboard and provide VCC and ground from BBB to breadboard line. L293D operates on at least 4.5 V  while Switch and GPIO work on 3.3 V. BBB has on chip system 5 V and 3.3 V pin header. So you can draw both supplies from Beaglebone Black. System 5 V is drawn for L293D and 3.3V is drawn for switch and GPIO.

Push button has two terminals. Any one of them connects with ground. Provide the VCC 3.3 V through 1k ohm resistor to another terminal of push button. Common end of resistor and push button, connect with pin number 30th of header P9.

L293D is motor driver IC  that allows driving the motor in both directions. DC motor drive is on high current capacity but BBB’s GPIO pin cannot generate sufficient current to drive DC motor. L293D IC overcomes this problem and it is required to interface between BBB and DC motor. L293D also protect BBB from damage due to back emf generated by DC motor. 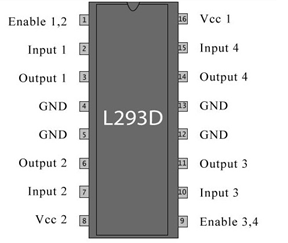 I attached 0.1 uF capacitor between output1 and output2 terminals for alignment and back emf protection purpose. Provide the supply to Beaglebone black by connecting with PC through USB cable. Now your circuit is prepared. 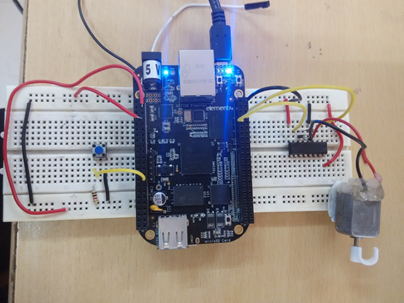 Open the command terminal and take an access of Beaglebone black through SSH as explained in the tutorial getting started with Beaglebone black. Create a new file using touch command with .py extension (i.e. led.py). Open the file with any text editor (i.e. nano, vim etc.) and write a code in python language.