Continue to Site
In the previous tutorial, a Bass Boost Power Amplifier was designed. Now it’s time to start designing power amplifiers suitable for specific applications. In this tutorial, a car audio amplifier will be designed.
The cars have been coming with inbuilt audio systems from years. An audio system of a car is one of the important features that shines as unique selling point (USP) for any car in the market. The audio systems have become a vital accessory for any car. Even many times consumers replace the default audio systems came in their car with new one for better driving experience.
Any car audio system has the following basic components –
1) Head Unit
2) Amplifier
3) Speakers
The head unit is the heart of the car audio system. The head unit provides the audio signals (to be reconstructed as sound) from cassettes, CD players, satellite radio, internet radio, USB drive or other source of audio. Nowadays, head units in high end cars also come with video feature. Such head units have display source hooked with the head unit, so a video from a CD, DVD or USB drive can be played on it. Even the head units are nowadays equipped with automated voice assist for the driver.
The audio signals from the head unit are weakened due to resistive nature of the connecting wires. So, a power amplifier is required at the output stage of the head units to boost signals so that they could reach to the speakers without significant losses. Generally, due to size constraint in the car, the amplifiers are combined with the head unit only. So, there are inbuilt amplifiers in the head unit itself. It is also possible to connect external amplifiers with the head unit to further boost the sound quality.
With speakers, the audio system of a car is completed. There are three or four speakers in a car placed at different interior positions. The speakers take the audio signals from the amplifier and reproduce the sound. A car requires high power amplifier as the sound needs to be louder in it. Generally, 10 Watt amplifiers are standard and sound pretty loud. For a descent sound quality, 6 Watt amplifier is sufficient.
In this tutorial, a 6 Watt car audio amplifier is designed using TDA2003 IC. TDA2003 is a 10 Watt Car Radio Power Amplifier. This IC can sustain a peak voltage up to 40 V and has output current capability up to 3.5 A. The IC can be operated by supplying a voltage between 8 V and 18 V. The audio amplifier designed in this tutorial is also a power amplifier. On the basis of application, the audio amplifiers can be categorized into two classes –
1) Pre-Amplifier
2) Power Amplifier
The pre-amplifiers are used to level up the audio signals from a microphone or audio source to standard voltage levels while the power amplifiers are generally used at the output stage of the audio systems to boost audio signals before they are reproduced by the speakers.
In the introductory article of this series, various design parameters of the audio amplifier circuits were discussed like Gain, Volume, Skew Rate, Linearity, Bandwidth, Clipping effect, Stability, Efficiency, SNR, Output power, THD and loop grounding. This amplifier circuit will be designed considering the following design parameters –
Gain (Voltage) – 34 dB
Bandwidth – 40 Hz to 15 KHz
Output Power – 6 W
The amplifier will be designed to supply audio to a 10 Watt speaker having an impedance of 4 ohms. The circuit will have the following additional features –
– No Clipping Effect
– Volume Control
The designing of the circuit will be followed by testing of the circuit for the verification of the intended design factors.
Components Required – 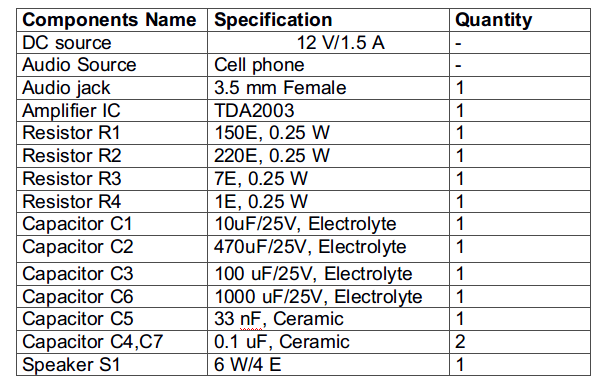 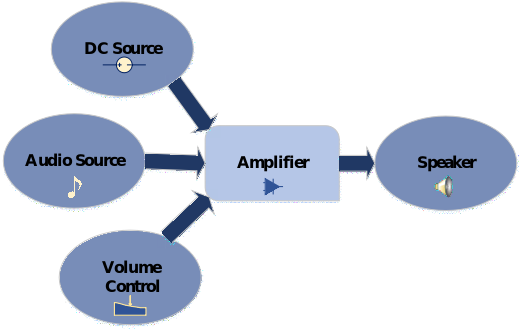 The amplifier circuit is built by assembling the following components together –
1) DC Source – A battery of 12V rating is used to power the circuit. This DC source also provides the bias voltage to the amplifier.
2) Audio Source – The audio input is provided from a smart phone. For receiving audio from the smart phone, an audio jack of 3.5 mm is plugged into the phone. The 3.5 mm audio jack has three wires – one for ground and two wires for left and right channel. As the amplifier is designed for single channel, only one of the channel wires will be connected to the amplifier as audio input. The ground wire of the jack will be connected to the common ground of the circuit. 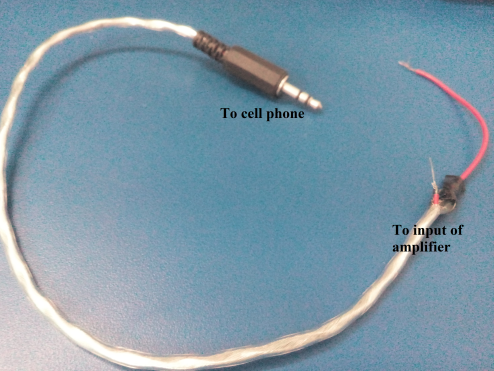 3) TDA2003 – TDA2003 is a monolithic audio power amplifier, so all the components of the amplifier circuit are integrated on the chip itself. This IC can sustain a peak voltage up to 40 V and has output current capability up to 3.5 A. The IC can be operated by supplying a voltage between 8 V and 18 V.  The IC has the following pin configuration –

The TDA2003 has the following internal circuitry –

TDA2003 is basically an operational amplifier with high power output. It can be used a power amplifier for car audio systems. The car audio amplifier designed in this tutorial using TDA2003 has a non-inverting configuration as the audio input is provided at the non-inverting input pin of the IC. This IC can output a power from 6 Watts to 12 Watts. If more power is tried to be drawn from the amplifier (beyond its specifications), the output voltage (amplitude of the audio signal) can start clipping. The clipping effect can severely damage the load which is the speaker in this case. 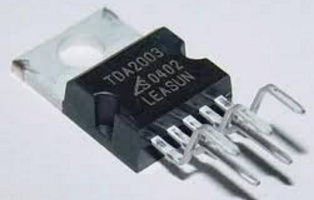 According to the datasheet of the TDA2003, the output power of this amplifier depends on the impedance of the load. The IC has the following power outputs at 40 dB for different load impedances at the output – 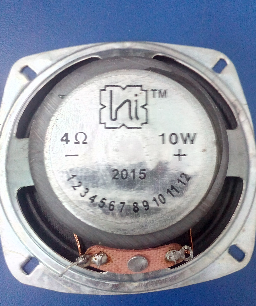 1. Always place the components as close as possible to reduce the noise in the circuit. Follow star topology when grounding, this will keep the noise low.
2. Use the capacitor of high voltage rating than the input signal.
3. Always use the filtering capacitor at the input terminal of power supply to avoid the unwanted ripples.
4. Use speaker of equivalent or high power rating as amplifier output power.
5. Always use a series capacitor at the output of amplifier to block any DC component.
6. Always calculate the maximum power rating of the amplifier before connecting it to the speaker. The practical value may differ from the theoretical one.
7. Avoid clipping of the output signal as it may damage the speakers.
8. It is recommended to use a heat sink with the IC to provide cooling as the output power is high and this may heat up the IC. Fig. 10: Prototype of 6 Watt Car Audio Amplifier
How the circuit works –
The typical application circuit of the TDA2003 as per given in its datasheet is used for this amplifier. According to the datasheet, the open loop gain of the IC when there is no feedback from output to the input is 80 dB while the closed loop gain when there is a feedback from output to the input is 40 dB. The voltage gain of the amplifier can be set by the resistive divider network (Shown as R2 and R3 in the circuit diagram) at the output pin of the IC. As per the datasheet, for a 4 ohms load at the output, the IC delivers 6 Watt power.  So, for a load of 4 ohms and output power of 6 Watt, the maximum output voltage without clipping effect can be calculated as follow –
P = V2(p-p)/2R
Where,
Output Power, P = 6 W
Load resistance, R = 4 ohms
The peak to peak voltage at output is then as follow –
P = V2(peak- peak)/2R
6 = V2(peak- peak)/(2*4)
Vp-p = 6.9 V
The maximum gain for a peak to peak voltage of 6.9 V is as follow –
Gain = Vout/ Vin
Considering, Vin (Input voltage) = 200 mV
Gain = 6.9/200
Gain = 34 (approx.)
For setting gain through resistors R2 and R3, the non-inverting OPAM gain equation for calculating the gain can be used. It is as follow –
Gain = (R2/R3) + 1
Assuming R2 = 220 ohms
34 = (220/R3) + 1
R3 = 7 ohms (approx.)
So, if R2 is assumed to be 220 ohms, the R3 should be 7 ohms for the desired voltage gain.
In the circuit, capacitor C5 and resistor R1 are used to set the upper cutoff frequency. The recommended value for this capacitor is 39 nF for which a capacitor of 33 nF is used as per the availability.
The value of the resistor R1 can be calculated as follow –
R1 = 20*R3
R1 = 20*7
R1 = 140 ohms
The value of the capacitor C5 can be calculated as follow –
C5 = 1/(2*Pi*B*R1)
Where, B is the frequency response. Every system respond differently to  different frequency. Some system amplifies frequency of certain range and attenuate the other ones. So the way any system output is related to the input signal at a different frequency is defined as Frequency Response of that system. In the datasheet of TDA2003, following frequency response graph between value of the capacitor C5 and frequency response B is given as follow – The power output of this amplifier should be 6 Watt for 4 ohms load.
Testing the circuit –
For the testing of the amplifier circuit, the function generator is used as the input source. The function generator is used to generate a sine wave of constant amplitude and frequency. Any audio signal is also basically a sine wave so a function generator can be used instead of using a microphone or actual audio source. So, the function generator can be used as input source for testing the audio amplifier circuit. During testing, at the output also, a speaker is not used as a load as the speaker is resistive as well as inductive. At different frequencies, its inductance changes which in turn changes the impedance (R and L combination) of the speaker. So, the use of a speaker as load at the output of the amplifier for deriving its specifications may give false or non-standard results. In place of speaker, a dummy load which is purely resistive is used. As resistance does not change with frequency so it can be considered a reliable load independent of the frequency of the input audio signal.
Ideally, the power output of this amplifier should be 6 Watt. The load however had an impedance of 4.7 ohms instead of 4 ohms. So, practically, the following observations were noted –

Fig. 12: Table listing output characterstics of 6 Watt Car Audio Amplifier
So, the output power of amplifier was approximately 5.75 Watt instead of 6 Watt. This is a tolerable loss in power, so the amplifier circuit is successfully working. This amplifier circuit is operating at a voltage of 12 V and has features like Polarity Inversion, Thermal Shutdown and Short Circuit Protection.
In the next tutorial, an amplifier circuit for regular headphones will be designed.