A 12V Battery is used as the input power source in the circuit.

For switching purpose a transistor and a diode are used as switching components.
The switching components has to operate on a specific frequency. This frequency is generated through an oscillator circuit. In this project, Arduino UNO is used to generate a PWM signal which provides the required frequency. Any other Arduino Board like Arduino Mega can also be used. In fact any microcontroller or microcontroller board which can output PWM can be used in the circuit. Arduino is chosen as it is the most popular prototyping board and can be easily programmed. Due to large community support, it is easy to learn and work on Arduino. The PWM signal is a train of the pulse which is used to turn ON and OFF the MOSFET. The MOSFET is used as the switching transistor in the circuit.
For switching purpose, a transistor and a diode are used as  switching components. For the selection of the transistor, MOSFET is chosen as FETs are known for their fast switching speed and low RDS (ON) (drain to source resistance in ON state). In this configuration, the MOSFET is connected in high-side configuration. As in high side, the N-channel MOSFET requires a Bootstrap Circuitry or a Gate Driver IC for its triggering, this makes the driver more complicated.  A P-channel MOSFET (shown as Q1 in the circuit diagram) is used in the circuit as it does not require a Gate Driver in its high side but it has high Rds (On) as compared to N-MOS. This results in more power loss. The MOSFET used in the circuit has its threshold voltage around 10V to 12V.
The switching time of the MOSFET and diode should be less than the rise and fall time of the PWM wave. The diode should offer low voltage drop in forward bias and the RDS (ON)of the MOSFET should be low. Always a gate to source resistance should be used to avoid any unwanted triggering of the MOSFET by external noise. It also helps in fast turning OFF the MOSFET by discharging its parasitic capacitance. A low value of the resistor (10E to 500E) can be used at the gate of MOSFET. This will solve the problem of ringing (parasitic oscillations) and inrush current in the MOSFET. The voltage level of the PWM signal should be greater than the threshold voltage of the MOSFET. So that the MOSFET can be turned ON fully with minimum RDS (ON ) .
The MOSFET cannot be triggered by the microcontroller as the microcontroller can generate a 5V PWM signal only. Therefore an additional IC IR2110 is used in the circuit to generate a PWM signal of 12V and the input to the IR2110 is provided by the microcontroller. IR2110 is a high and low side driver. It is a high speed (operational at high frequency) power MOSFET and IGBT driver with independent high and low side referenced output channels. The floating channels can operate up to 500V or 600 V. The IC is 3.3V logic compatible that is why it can be used with any microcontroller. The IC comes in a 14 Lead PDIP package. IR2110 has the following pin configuration – 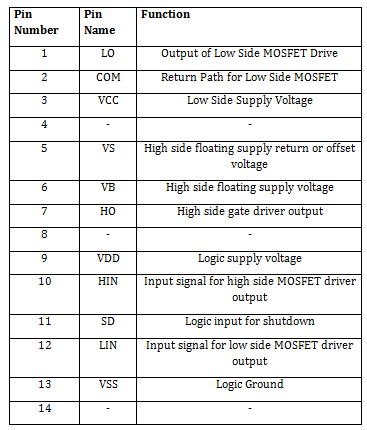 Fig. 3: Table listing pin configuration of IR2110 IC
Another switching component used in the circuit is a diode. The switching time of the diode should be less than the rise and fall time of the PWM wave. The Arduino board generates a PWM wave having rise time 110ns and fall time of 90ns. The forward voltage drop of the diode should also be very low otherwise it will dissipate power which will further reduce the efficiency of the circuit. The diode should offer low voltage drop in forward bias and the RDS (ON)of the MOSFET should be low. So in this experiment, a BY399 diode is selected which suits best to the circuit design.
Before generating the PWM signal the switching frequency for the circuit needs to be decided. For this buck-boost converter, a switching frequency of 200kHz is selected which will work fine for this converter design.
The duty cycle of the generated PWM signal is another important consideration as it will decide the active state of the MOSFET. The duty cycle can be calculated as follows –
Vout = -Vin *(D/(1-D))
For Boost Mode-
Desired output voltage, Vout  = -18V
Input voltage, Vin = 12V
By putting all the values,
DBoost /Dmax%= 60% (approx.)
For Buck Mode-
Desired output voltage, Vout  = -5V
Input voltage, Vin = 12V
By putting all the values,
DBuck /Dmin% = 30% (approx.)
For generating 200 kHz PWM signal having duty cycle between 30% and 60%, the Arduino board is programmed. The Arduino sketch required for generating the desired PWM output is attached in the tutorial. It can be downloaded and burnt to an Arduino board for use.
The higher is the frequency selected for switching components, the higher are the switching losses. This decreases the efficiency of the SMPS. But high switching frequency reduces the size of the energy storage element and improves the transient response of the output.

As a filtering element, a capacitor (shown as C1 in the circuit diagram) is used at the output of the circuit. In normal operation of Buck-Boost converter circuit, the transistor Q1 turns ON and OFF according to the frequency of the oscillator circuit. This generates a train of the pulse at the inductor L1 and capacitor C1 as well as transistor Q1. As the capacitor is connected with inductor in both negative and positive cycle of the PWM signal. This makes an LC filter which filters the train of the pulse to produce a smooth DC at the output. The value of the capacitor can be calculated by using following equation of CCM –
Cmin >= (Io(max)*Dmax)/(Fs*DVo)
Where,
Cmin = minimum value of capacitor
maximum duty cycle, Dmax = 60%,
DVo = Output ripple voltage
Assuming DVo = 100mV
By putting all the value,
Cmin >= (50*10-3*0.6)/(200*103*100*10-3)
Cmin >= 1.5uF
As it is the minimum value of capacitor required, so in the circuit a capacitor of standard value is used which can be easily available, so, capacitor of 2 uF is taken.
The value of the capacitor should be greater than or equivalent to the calculated value. So that it is able to provide the desired current and voltage at the output. The capacitor used in the circuit must be of higher voltage rating than the output voltage. Otherwise, the capacitor will start leaking the current due to the excess voltage at its plates and will burst out. It is important that all the capacitors should be discharged before working on a DC power supply application. For this, the capacitors should be shorted with a screwdriver wearing insulated gloves.

In this converter, either Buck Mode or Boost Mode can be selected through a DPST switch.  When the switch is in the normal position, it set the converter in Boost mode and when it is pressed then the converter goes in Buck Mode.

Any SMPS has some switching components which turn on and off at high frequency and has some storage component which store the electrical energy while the switching components are in conduction state and discharge the stored energy to the output device while the switching components are in non-conduction state.
In this tutorial, the Buck-Boost Converter is designed by two switch topology. This converter consists of an inductor (L1), a capacitor(C1), a transistor which acts like a switch and diode (D1)  which acts like a second switch. In this configuration of Buck – Boost Converter the duty cycle(D) is the factor which decides whether the converter is in Boost mode or Buck mode. When the duty cycle is greater than 0.5, converter operates in Boost mode and when the duty cycle is less than 0.5, it operates in Buck mode. When the switch is closed, the inductor is directly connected to the source and starts accumulating energy. This makes the diode reverse biased. In this state, the output capacitor provides the current to the load which was previously charged in OFF state.

Fig. 4: Circuit Diagram showing ON state of switching Component in Buck-Boost Converter
When the switch is open, the source gets disconnected from the circuit and the current starts decreasing and becomes zero. As the inductor has stored the energy in the ON state, it will now act as an energy source. Hence, the inductor will create a polarity across it. This will be opposite in polarity as in ON state. This will make the diode forward biased and the inductor now provides the current to the load through diode D1. When the stored charge in inductor starts reducing then the output voltage starts falling.
But now the capacitor will act as a current source and keep providing the current to the load until the next cycle i.e. the ON period. The overall effect is that for duty cycle greater than 0.5 V the inductor stores more energy and at the output, stepped up DC voltage compared to input voltage is obtained. Similarly, in Buck Mode, stepped down DC voltage at the output is obtained. One important observation in this Buck – Boost topology is that the polarity of the output voltage is opposite to that of the input. So, it is an Inverting Buck – Boost Converter.

Fig. 5: Circuit Diagram of OFF state of switching Component in Buck-Boost Converter
In the ON state, the Diode was in blocking Mode (OFF) and the Transistor was ON. In OFF state, the Diode was in conducting mode (ON) and the Transistor was OFF. So, a Buck-Boost Converter is having two switches, one is a transistor and another one is the diode. At a time only one of them conducts while other goes in non-conduction state. 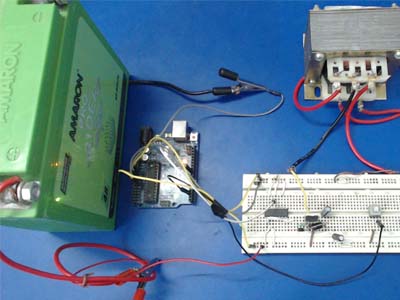 Fig. 6: Prototype of Open Loop Buck-Boost Converter  designed on a Breadboard
In this circuit, Input Voltage, Vin = 12V
Practically, Battery Voltage, Vin = 11.6V
For Buck Mode- On measuring voltage and current values with different loads at the output when switch is pressed, following observations were taken –

Fig. 7: Table listing output voltage and current from Open Loop Inverting Buck-Boost Converter for different loads in Buck Mode
So, it can be observed that a current of 42 mA can be drawn at 4.2 V output with a tolerance limit of +/-0.5V.
For Boost Mode – On measuring voltage and current values with different loads at the output when switch is released, following observations were taken –