Dialog Semiconductors PLC recently introduced the FC9000. It is one of the first Wi-Fi SoC from Dialog that came forth since its completed acquisition of Silicon Motion’s Mobile Communications product line. 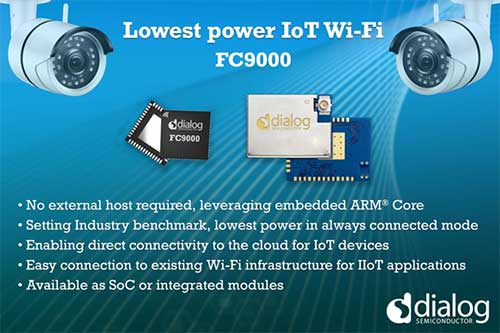 The new FC9000 keeps a tight focus on battery-powered IoT devices that include smart thermostats, wireless sensors, video monitoring systems as well as smart door locks. This new SoC also works on wireless sensors that enable direct connectivity with Wi-Fi networks while backing a battery power longevity much ahead then a single year.

Prior to this, all the devices running on Bluetooth, ZWave or Zigbee standards required pairing with a cumbersome and expensive smartphone or gateway for better cloud connectivity. This further added unnecessary costs and complexity  to adoption of IoT. FC9000 is able to get over all such issues as the world moves to ubiquitous world of Wi-Fi.

Its proprietary power-saving algorithms establish a completely new threshold of power in industry. It paves way to work on work on with some microamps enhancing the overall battery life for all kind of end-devices. The biggest success registered by it with Venstar that is using it in its devices. Venstar is one of the premium energy management system and thermostat supplier globally.

In The Maker’s Words

Sean McGrath, the Senior VP and General Manager of Dialog Semiconductors Connectivity and Audio Business Group, adds, “The FC9000, the first product in our new VirtualZero™ product line, complements our existing portfolio of leading Bluetooth low energy SoC’s for connected devices and represents our next IoT connectivity innovation to pass on to our customers. This Wi-Fi device is the first in a series that we plan to launch which solves major pain points for both manufacturers and end-users around IoT network compatibility and power consumption.”