Control is the main ingredient in nanotechnology, if you have control over distances and arrangements between nanoparticles, it can surely permit tailored interactions strengths that will allows fusion of properties in to devices like the plasmonic sensors. A team of researchers working at the Tokyo Institute of Technology employed dendrimers that are capable of mimicking electron valency of atoms and then link those in arrays with molecules capable of coordinating with dendrimers since these will be capable of forming covalent electron pair in their valence shell -”electron pair mimicry.” Ken Albrecht, Kimhisa Yamamoto, and their team working at the Tokyo Tech thought of the dendritic polyphenylazomethine (DPA) that comes with a structure that comes out from a central core. “Lewis Base” sites of DPA get coordinated with “Lewis Base” molecules. 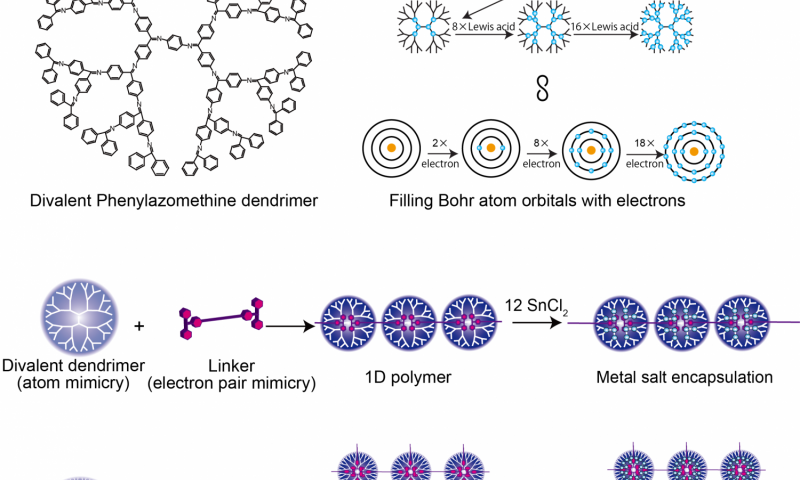 A close analysis of ratio between every single dendrimer and SnCl2 Lewis Acid molecules shows that step enhance from 2 to 4 and then 8 and so on. This mimics the valency of Bohr atoms that have 2, 8, 18, and 32 electrons.  In the 1, 2, 3 and 4th orbitals. This shows the increment in number of molecules that are capable of coordinating with dendrimer along with an increasing distance from the core.

The work of this team speaks of new facets of atomic mimicry that will really help in a lot many applications. The team adds, “The geometry and pitch can be controlled by the design of the dendrimer and the linker and are potentially applicable to plasmonics and nano electric grids.”. To reach this conclusion, the team closely analyzed coordination between DPA and stronger binding Lewis acid called the triphenylmethylium that is bound to have a rod-like molecule – the phenylene ethynylene. The backbone of phylene ethylne is strong enough to now allow assimilation of cations on either end with similar dendrimer.