Continue to Site
Imagine if someone made you wear VR goggles on your head and throws a ball pointing at you, will you be able to catch it? No, right? The ball would pass in the most harmless manner and to the ground as you wouldn’t see it coming. But what if someone could track the ball and feed its movement trajectory into your VR glasses. Will you catch it then? The research team from Disney believes yes the person would be able to catch the ball. They were able to accomplish this fact by installing predictive trajectory algorithms, it predicted that the chances of the ball being caught by the subject will be increased to 95 percent.
A Disney research team recently decided to bring up its feedback game to a substantial level by including a simulated haptic touch experience of from the traditional way by replacing the genuine touch experience. This allows the users to see the objects in Virtual Reality and experience the very same thing with their hands. This concludes that a VR system is able to track a real-world event, grab the event data and transforms it into a three-dimensional model and feeding that back to user’s eyes through the headset. 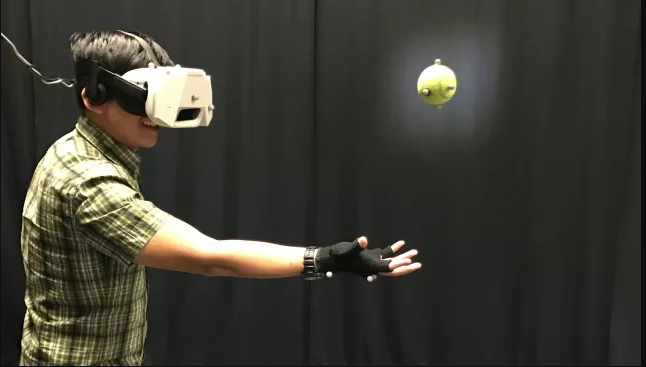 The user then responds like anyone else who would take the same action when they see the ball coming to them in real life. They will catch it both in VR as well as reality. This offers a more real-life experience as it is more real. Unlike other haptic devices that can offer a one-feeling-fits-all experience of vibration for every new event. As and when you will catch the ball with Disney research system, it feels more like a ball. Simple because it is a ball.
Filed Under: News
Tagged With: Research