Continue to Site
People have been trying to guess the potential of Raspberry Pi in DIY smartwatch projects from a long time. This started with the release of smartwatch from Apple. However, it ended as soon as it started, the reason, the size of Raspberry Pi might be smaller than your regular desktop but it is way more than that required for a smartwatch or any other regular watch. However, Alex Eames had a different view about it. He created it in response to Apple’s smartwatch, if you see the watch it looks more like an arm watch rather than a wrist watch. But a cool beginning to start with. 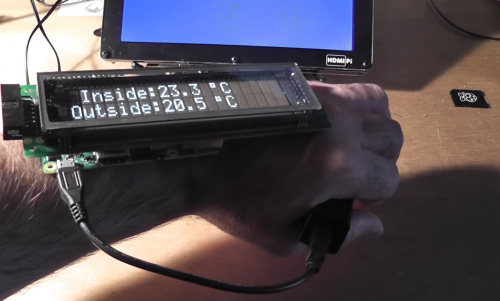 The concept earns hundred on hundred marks but a little lower in terms of utility. But time is evolving at a very rapid pace. Mot peripheral companies are now busy making smaller and smaller screen displays, and after release of Raspberry Pi Zero it is possible to make a watch this at home. You can give them pretty good looks as well.
Same is the view of Jeremy Lee, an amateur astronomer has similar ideas about automating transformation between Linux device and telescope. He began working on his ideas and started building a snowball and ended up making a Manipulator Zero. It is very very tiny and is capable of running a Linux desktop on your wrist. The device also has a gyroscope for tilt control. The best part is, it is located in Dr.Who Vortex Manipulator. The “gyromouse” operator Jeremy have installed most applications in it. These do not need any kind of typing, shift-clicking can be used just by tilting the wrist.
Filed Under: Reviews