During power outages when all the batteries around your home drain away, the only option left for you would be this emergency phone charger. This tutorial shows you how to charge a phone using a 12V DC motor and a couple of other parts. 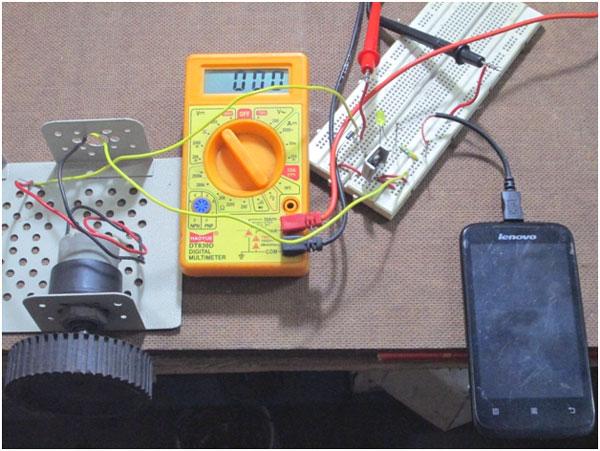 – This is just the first version which utilizes very few components and hence it’s quite inefficient. This can never replace a commercial AC wall charger!
– I designed this when there was a power outage in my city for a whole week and there was no other source left to charge the phones. The amount of charge you can get depends on stamina of the person rotating the wheel. Do not expect it to charge a device 100%.
– And lastly, turn off your phone while charging for better results.

Well it is basic physics but anyways let me give you a small explanation.
Motors are devices which convert electrical energy into mechanical energy. Example: Fans, vibrator in your cell phone, etc.
Generators are devices which convert mechanical to electrical energy. Example: Dynamos used in cycle lights, diesel generators used in apartments and shops, etc.
A DC motor can also work as a DC generator and vice-versa since their construction and operating principle are similar. So I would be using a 12V DC geared motor as a generator since we need a power source to charge our device.
Now, a question may arise as to why I am using a geared motor instead of normal one. Let me explain it to you:
A plain 12V DC motor (can be found in a tape recorder or DVD drives) when powered, can reach a speed of range 1000-3000 RPM. Similarly, if you want to generate some power using that same DC motor you would have to spin the motor at that range to get decent power which is impossible for a human.
The gear in a geared motor reduces the net speed of rotation and increases the torque when it is powered. And the same gears convert the torque you apply into speed and hence make the motor shaft spin at high speed even if you spin the gear’s shaft at low speed.

Motors with higher speed (like 200 RPM, 500 RPM) were too easy to spin but generated lesser power and the ones with lower speed (like 10 RPM) required more torque to spin. So 100 RPM was optimal in this case.
Depending on the speed at which we rotate the shaft, the voltage varies and obviously it would cross 5 Volts easily, which can damage the device (our phone in this case) and hence we use a 7805 voltage regulator and capacitors.

As I said this is a very simple DIY and doesn’t take much time. You can make it in  as much time as it takes to cook instant noodles.
– Gather all the parts shown in the image. 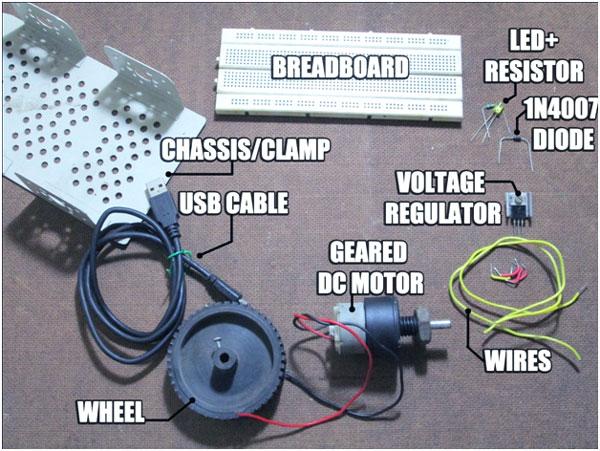 -Make a hole in the wheel far from the center. This would let you put in something like a screw driver and turn it. 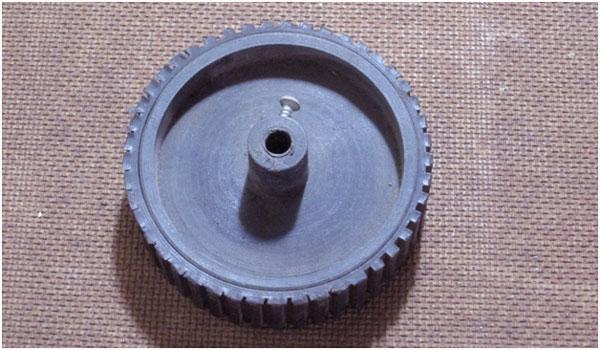 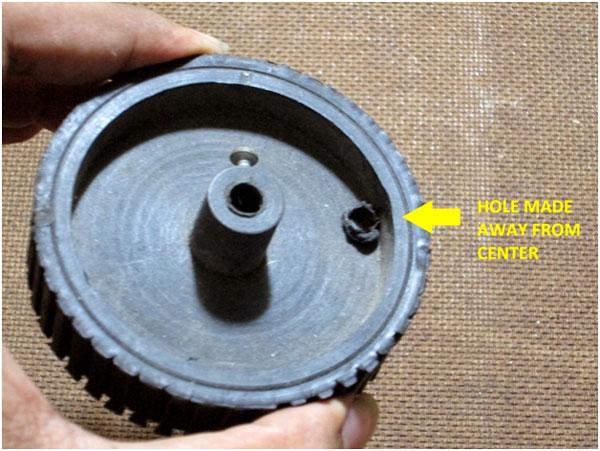 – Attach the motor to the chassis/clamp so that it stays firm while you are rotating it. 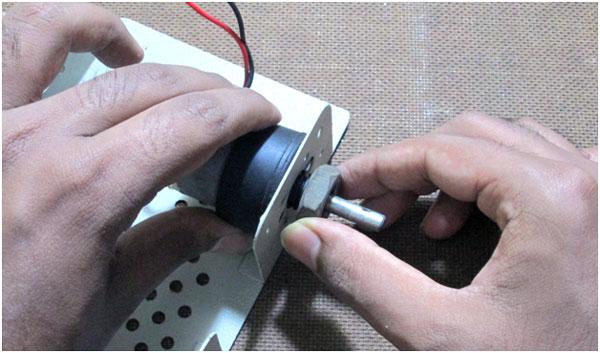 – Now attach the wheel to the motor’s shaft and tighten the screw on the wheel. 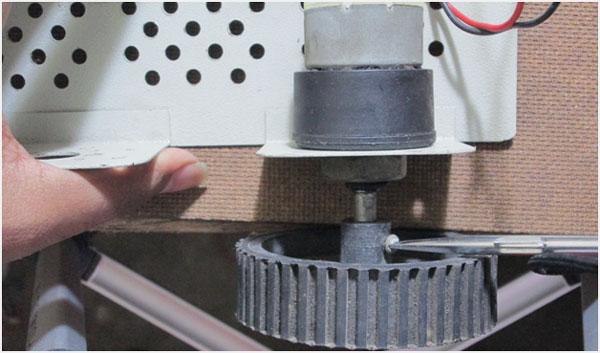 – Arrange the rest of the circuit on a breadboard. 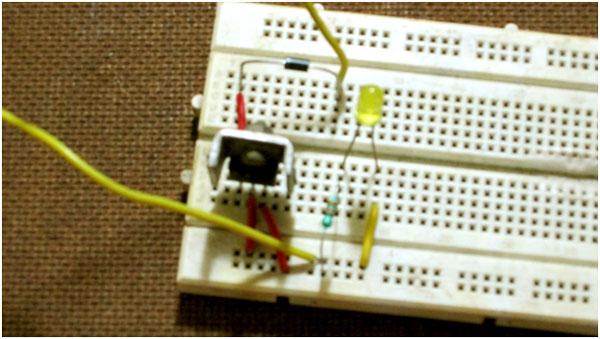 – Cut the USB cable in such a way that the +5V line (red in color) and GND line (black mostly but here it was white) are exposed and connect them to the breadboard at respective locations. 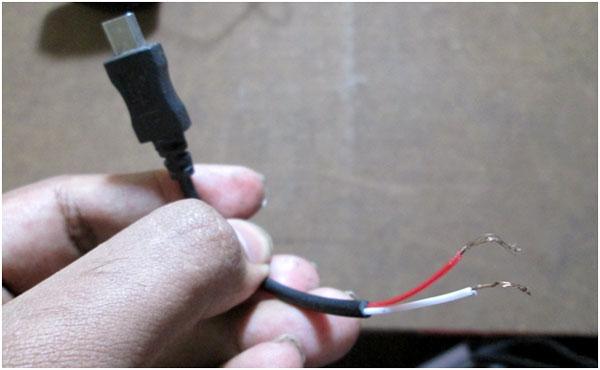 Fig. 8: Image showing Ground and VCC Wires taken out from a USB cable

-Now connect one of the wires from motor to the diode and other to the ground. 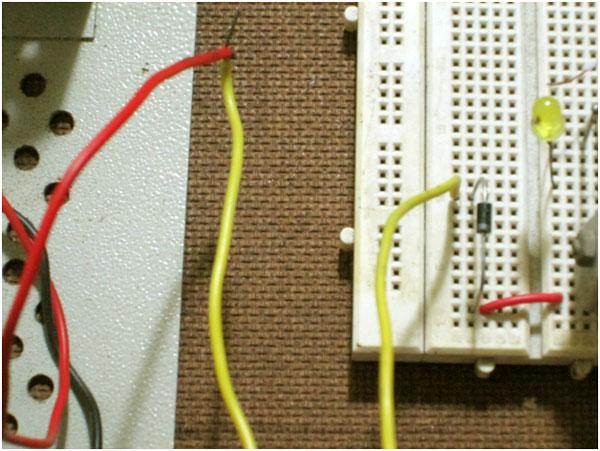 I’ve connected a multimeter  in parallel to the motor in order to monitor the voltage generated by it.

Place a screwdriver in the hole and start spinning the motor in one direction. The LED should glow now and the phone should start charging. If it doesn’t then:
1. Try rotating the motor in reverse direction.
2. Check if the connections are tight.
3. Make sure you are rotating at enough speed. The voltage generated by the motor should at least cross 6.5V in order to make the 7805 function.