As a beginner, building robots is a complex job, especially a Snap circuit robot. For the electronic project, one has to be familiar with the PICAXE program and with the various electronic components that are used in robot construction. It provides a platform to learn about the working of the programmable robot along with their electronic parts and the PICAXE program.

Further, access is required to the educational toy called Snap Circuits. This toy allows you to learn electronics, where soldering irons are not required and it teaches as the component that simply snaps together. Overall, it makes the project comparatively easier to complete. A robot built out of Snap Circuits requires pieces and parts from various sets that works together with other electrical components and helps in creating a working robot.

The components required to build this project are to be assembled from different sources and the PICAXE Programming Editor has to be downloaded to program the robot. Some of the components are plastic Base Grid, Snap Circuits Rover, Motor Control IC U8, single snaps, conductors etc. For the power supplies, the Snap Circuits B5 block work as a voltage regulator and only allow 5 Volts to pass through the current. 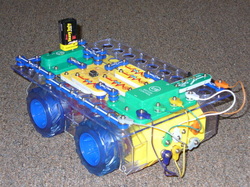 PICAXE Programmer makes the robot work by using a BASIC code, which is an easy program to be understood and entered. The PICAXE controller is installed on the Snap Circuits 8-pin socket along with PICAXE Programming Editor in your computer. Before starting anything, it is necessary to learn to create a flow chart that turns the motor along with the microcontroller programming. Some basic setting of the microcontroller must also be learned to avoid any type of damage.

Some of the fundamental steps Involved in Building the Robot includes accumulating a power source, the brain, and mode of locomotion. Snap Circuits Rover can be used, which is already put together and escape the toiling of building it. The two separate motors that work well with jumper wires are used to turn the front wheels and the back wheels respectively. The rover also contains a battery compartment that holds six AA batteries. But it has some disadvantages too that includes design difficulties and possible damage to the PICAXE.

For more details, check out the following link.