Despite noticing the steady rise in global temperatures due to generation of synthetic chemicals, there stands a severe lack of research on pesticides, pharmaceuticals, and industrial chemicals. It is a blind spot that is slowing down the progress in mitigation of global changes and achievement of sustainable goals. According to a freshwater ecologist from Cary Institute, Emma J. Rosi, “To date, global change assessments have ignored synthetic chemical pollution. Yet these chemicals are increasing at a rate that is on par, or more rapid, than other agents of global change, such as CO2 emissions or nutrient pollution.

“The team making this study observed the major global trends that showcase a steep rise in production and usage of synthetic chemicals since 1970s. These were then compared with the main factors responsible for pollution. There has been reports on growing influence of synthetic chemicals on environmental degradation which has been going unnoticed on the researcher’s part. The same was confirmed by a professor of biogeochemistry, Emily S. Bernhardt, as she quotes, “Research on the ecological impacts of synthetic chemical pollution has been static since the 1970s. But our portfolio of these manufactured chemicals keeps growing – with more than 80,000 now in use commercially. This knowledge gap is becoming a chasm, with real consequences for ecological health. 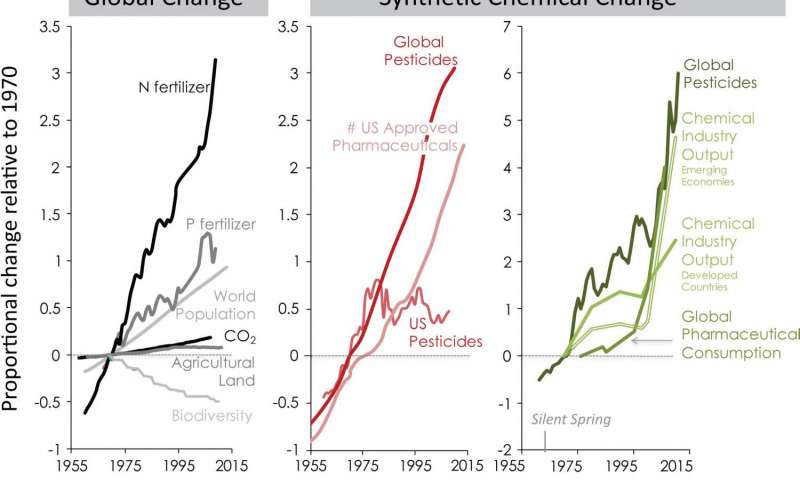 “Pharmaceuticals, industrial chemicals, and pesticides have the tendency of leaving long term toxic imprints over ecosystems. The customary ecotoxicology that is mostly performed under lab conditions, has very little to do with behavior of these substances in nature. There are a few that accumulate in the food web while a large number of others turn up to be more toxic as they react with other chemicals. One of the team members, Rosi, concludes that, “In the 1960s, Rachel Carson’s Silent Spring sounded the alarm on the environmental dangers of synthetic chemicals. The problem hasn’t gone away, it’s only intensified, and we need to reawaken awareness. Synthetic chemicals are leading agents of global change and it’s essential that we invest in the research needed to understand and minimize their impacts.”