Continue to Site
In telecommunication, a caller needs to dial the number of the callee. The earlier versions of telephones used to have rotary type dials which are now obsolete. Almost all the landline and mobile phone handsets now use pushbutton keypads.

What is DTMF?
DTMF is a signalling system for identifying the keys or better say the number dialled on a pushbutton or DTMF keypad. The early telephone systems used pulse dialling or loop disconnect signalling. This was replaced by multi frequency (MF) dialling. DTMF is a multi frequency tone dialling system used by the push button keypads in telephone and mobile sets to convey the number or key dialled by the caller. DTMF has enabled the long distance signalling of dialled numbers in voice frequency range over telephone lines. This has eliminated the need of telecom operator between the caller and the callee and evolved automated dialling in the telephone switching centres.
DTMF (Dual tone multi frequency) as the name suggests uses a combination of two sine wave tones to represent a key. These tones are called row and column frequencies as they correspond to the layout of a telephone keypad. 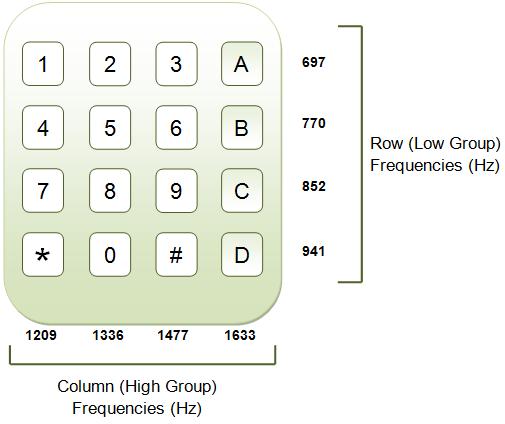 Fig. 2: Image showing DTMF Frequencies
A DTMF keypad (generator or encoder) generates a sinusoidal tone which is mixture of the row and column frequencies. The row frequencies are low group frequencies. The column frequencies belong to high group frequencies. This prevents misinterpretation of the harmonics. Also the frequencies for DTMF are so chosen that none have a harmonic relationship with the others and that mixing the frequencies would not produce sum or product frequencies that could mimic another valid tone. The high-group frequencies (the column tones) are slightly louder than the low-group to compensate for the high-frequency roll off of voice audio systems.
The row and column frequencies corresponding to a DTMF keypad have been indicated in the above figure.
DTMF tones are able to represent one of the 16 different states or symbols on the keypad. This is equivalent to 4 bits of data, also known as nibble.
Most DTMF decoders can process at least 10 tones per second under the worst of conditions, so DTMF can easily convey 40 (10 x 4) bits or 5 bytes of data per second which is nowhere near to the performance of a good communication modem, which can operate nearly 600 times faster (28,800 bits per second). But DTMF signalling is lot more robust under noisy line conditions.
It should be noted that the numbers and symbols on the keypad do not always match the binary values of DTMF decoders. Most notably, the ‘0’ on the keypad is represented in DTMF by a decimal value of 10 or binary value of 1010.
The binary codes corresponding to symbols in a DTMF keypad are listed below.
Applications
DTMF tones are thus mainly used at the telephone switching centres for detection of dialled/called number. They are also used by certain radio and cable TV networks. These networks use DTMF tones to signal a network station or local cable operator when a local advertisement is to be inserted or for station identification. In broadcasting, this is known as local insertion. DTMF tones were also used by terrestrial stations for turning on and shutting off remote transmitters.

Filed Under: Tutorials
Tagged With: dtmf